The Brazilian drama A História da Eternidade [The History of Eternity] (2014) is the feature film debut of director Camilo Cavalcante (based on his 2003 short film), a mythological look at village life in the remote Brazilian countryside – more specifically three women of three different generations: the teenage girl longing for love, freedom and the ocean, the middle-aged woman coping with the loss of her child and an elderly woman struggling with the sexual awakening of her returned son. Shot in a languid tempo, relying more on visuals and mood than dialogue, there’s no denying its poetic, universal ambitions – however, it is perhaps rather heavyhanded in its portrayal of the micro-cosmos on display.

Zbigniew Preisner needs no introduction; the regular collaborator of the late auteur Krzysztof Kieślowski, he’s made his mark on not only Polish, but international cinema and concert scenes as well. He’s considered one of the foremost European composers of his generation. Two years ago, he composed the gorgeous, ethereal music for the Norwegian film Skyggenes dal (2017) – which we considered the best score that year, and which was eventually (and thankfully) released by the label Caldera Records in 2018. It’s Caldera that once again comes to the rescue in finally releasing this gem of a Preisner score.

While the film employs local musical colours diegetically, like the omnipresent accordion player that becomes an emotional outlet not only for the woman who’s lost her child, but the village as a whole, there is none of that in Preisner’s non-diegetic score. Instead, it moves discretely in and out of the story with a minimal, but effective ensemble of instruments.

At the heart of a score is a soulful, melancholic theme propelled by Santaolalla-like acoustic guitars and violins, such as «Main Theme», «The Call», «The Hunt», «Re-Discover», «Main Theme – Version II» and «End Credits». These have been placed brilliantly at the beginning, middle and end of the album, as an anchor that pulls you back into a more defined thematic territory – no doubt underlining the lifechanging events and hopes of the three female villagers.

The rest of the album is more exploratory in tone and structure. Sometimes on piano, as in «Funeral», «Sunrise» or «Sad Heart», other times with more airy, distant guitars or Hammond organs (sounding rather like synths) that send associations to Vangelis and Terje Rypdal – as in «Absence», «Moonrise» or «Water». Quite often, these tracks are tentative in nature, with absences between notes while the reverb lingers, as if they’re trying to say something about the mental state of the characters, striving for some sort of resolution.

A História Da Eternidade is a typically excellent Preisner score, even if the film itself has some issues. Not quite on the level of Skyggenes Dal, but with much of the same DNA – heartbreaking, high-pitched melody lines, slow and beautiful chord modulations and ‘spacey’ use of a relatively small musical ensemble. Hopefully, this premiere release, and Caldera’s “Preisner project” in general, will allow more people to re-appreciate the composer’s film work, post-Kieslowski.

A História Da Eternidade is currently not available in streaming format, but can be purchased from online soundtrack vendors, like Music Box. There is a 5-minute sample on SoundCloud. 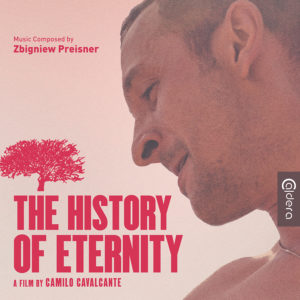