John Williams‘ newest album Across the Stars (named after the love theme from Star Wars: Episode II – Attack of the Clones) features renowned German violinist Anne-Sophie Mutter performing arrangements of his film themes for solo violin and orchestra. What could have easily been just another in a long list of compilations of famous Williams themes turns out to be a highlight in his discography.

Anne-Sophie Mutter started her career in her early teens in the second half of the 1970s under the tutelage of Herbert von Karajan, just when John Williams had his string of blockbuster scores that turned him from an already prolific composer of countless film scores and several concert works, including a symphony (not to mention a considerable career in jazz before all that)  into the film music superstar he still is today. When Mutter had her debut at the Salzburg Festival in May 1977, the Star Wars soundtrack had just been recorded two months earlier, but would not be released for a few more weeks. Mutter saw the film in 1978, and it clearly made a strong impact on her – 40 years later, she still proudly identifies as a fan of both Star Wars and Williams.

Mutter was introduced to Williams by her one-time husband and Williams’ lifelong friend, André Previn (it was Previn who first put Williams into contact with the London Symphony Orchestra for Star Wars, among other things). She begged him to compose a piece of music for her, and the result was Markings, a roughly 8 minute long piece for violin, strings, and harp, which premiered at Tanglewood in July 2017. But Mutter wanted more and suggested turning some of Williams’ film themes into concert pieces for violin and orchestra. Williams was skeptical, pointing out that those themes had been written for different instruments and would not transfer well to the violin, but Mutter persisted, and as Williams has been repeating in concerts and interviews over the past months, “Anne-Sophie is many things […] There is, however, one thing that she is not: She is not a woman you can say no to.”

The result is a collection of almost 80 minutes of (mostly) brand new arrangements for violin and orchestra, premiered at Tanglewood this July, with David Newman and Williams himself each conducting parts of the concert. Mutter also presented the programme in Munich at her first ever open air concert in September. The album itself was recorded earlier, in April, and originally released in August. A Deluxe Edition with 5 additional tracks was released a month later at the end of September, two weeks after the Munich concert.

Williams is no stranger to writing for the violin, having written several concert works for the instrument, including two violin concertos – the first dating back to 1976, the year of Mutter’s concert stage debut. In the late 1990s, he teamed up with Itzhak Perlman (who famously performed the solo violin part on the original soundtrack recording for Schindler’s List, which won Williams his 5th Academy Award, as well as a BAFTA and a Grammy) for two albums of arrangements of film themes for solo violin and orchestra, entitled Cinema Serenade. The first of those albums consists mostly of film themes from the 1980s and 1990s (including three by Williams himself), with three earlier pieces from the 1950s and 1960s, while the second one focuses on music from Hollywood’s Golden Age. Most pieces were arranged by Williams, with the majority of the remaining ones handled by Williams’ frequent collaborator Angela Morley (André Previn himself arranged his own theme from Four Horsemen of the Apocalypse).

This new album differs considerably from the Cinema Serenades. For one thing, all pieces are based on original John Williams compositions, and all the arrangements are his own as well. Also, as their name implies, the pieces on the Serenades are mostly arranged as romances, whereas many of the new arrangements are much more dramatic in nature. The Deluxe Edition contains 17 tracks, 16 film theme arrangements plus the premiere recording of the concert piece Markings (pushing the total length of the album beyond the 80 minute mark). The regular release excludes Markings and four of the film tracks (including my personal favourite) and thus seems pretty pointless in comparison. Sadly, all versions of the album lack «The Devil’s Dance» from The Witches of Eastwick, which was one of the highlights at the concerts, but was finished too late to be properly rehearsed in time for the recording sessions.

Most pieces are based on the existing concert versions of their themes. The selection consists of a number of themes from the Star Wars series, the two major themes from the solo violin-based Schindler’s List score, five pieces from Williams’ post-2000 scores, the two remaining themes also (in addition to the Schindler’s List theme) featured on Cinema Serenade, and two themes from the 1970s which were suggested by Previn. The arrangements are done in the style of a classic violin concerto, singling out the violin as the solo instrument without reducing the orchestra to a mere background player. Williams adds new openings and cadenzas to even his most well known themes, as well as several new instances of the fake endings that have become a mainstay of his concert arrangements. His initial worries that the pieces would not translate well to the violin seem unfounded, as every piece sounds like it had been naturally written for the instrument.

The performances are all first rate. Mutter, who showed up to the recording sessions wearing a Yoda T-shirt, plays her heart out, often changing her style to imitate the original instruments of the pieces. The orchestra under Williams’ direction follows suit. I’ve long held the opinion that as a concert conductor of his own film works, Williams has often been too tied to film timings to let the music fully breathe on its own, but these recordings bristle with life and organic tempi that would make these recordings worthwhile even if they were merely the regular orchestra arrangements without the solo violin. Shawn Murphy‘s spacious recording is likewise excellent.

Of the three pieces previously featured on the first Cinema Serenade, «Theme from Schindler’s List» and «Theme from Sabrina» are the same arrangements. «Donnybrook Fair» starts out the same way as «Far and Away: Theme» on the Serenade, reworking the score track «Blowing off Steam», but where the Serenade track segues into the main theme, the new arrangement instead sticks to the material from that track and gives it a more thorough workout. The other piece from Schindler’s List, «Remembrances», first appeared in this version (which adds a new intro and a violin cadenza to the version included on the original soundtrack album) in 1995 on Williams on Williams, performed by Tamara Smirnova under Williams’ direction. He also recorded it with Gil Shaham in 1999, as did Gustavo Dudamel in 2015, again with Perlman on the violin.

All the other pieces, except for Markings, are entirely new arrangements. They are based on the existing concert versions of their themes, but even classics like «Yoda’s Theme» are shown in a new light, with the violin taking centre stage, alternately playing the main part or a counterpoint to the orchestra, but also letting the orchestra take over where appropriate – the climax in Dracula (one of the pieces suggested by Previn) is massive! «Donnybrook Fair» and «The Duel» (from Tintin) are notable virtuoso highlights, while «Hedwig’s Theme» is one of the most elaborate arrangements, opening with a wonderfully creaky-sounding violin part and using a wicked mini-cadenza to segue from the main theme to the Nimbus 2000 material, yet still following up with a much more extensive cadenza afterwards that takes the material further from the original version than most other arrangements in this collection.

My personal highlight however is «Princess Leia’s Theme». The original version from the Star Wars suite has long been one of my favourite Williams compositions, and this new arrangement has quite possible surpassed it for me. The following more detailed analysis of this arrangement serves as an example for how most of the pieces on the new album compare to their original soundtrack versions or concert arrangements.

The violin arrangement of «Princess Leia’s Theme» opens with a new misterioso intro featuring a brief solo horn and woodwinds playing fragments of the original intro. The solo violin then enters, presenting the theme instead of the solo horn in the original version, then (in a higher register) replacing the flute. On the third iteration of the theme, the strings play the theme as usual, while the solo violin plays ornaments in counterpoint. A brief cadenza leads to the fourth iteration, which is played by just the orchestra, until in the second half the solo violin takes up the original violin section part. A massive ritardando then leads to the climax, but instead of culminating in a tutti chord, the violin lands on the climactic chord (backed by strings) with a glissando, followed by a shimmering orchestral swell on the next beat. The effect is sublime, and quite possibly one of the best moments in all of Williams’s output. The coda is then taken straight from the original version – which has always ended with a solo violin.

The accompanying DVD contains two videos showing Mutter in conversation with Williams, a lengthy 31 minute one from March, before the recording sessions, and a shorter, roughly 8 minute one recorded in April, during the sessions. They mostly consist of Mutter posing questions to Wiliams, although he also asks a few in return. Mutter’s fangirl excitement is apparent and quite charming, although one wishes she’d actually let Williams answer in full – he seems perfectly happy to elaborate on his work methods and history, but Mutter excitedly takes every little cue in his responses to immediately follow up with the next question. Still, there are some anecdotes and details (more than one gets in the usual short scoring featurettes on film releases), and the mutual admiration of Mutter and Williams is obvious and refreshing.

Any reasonably comprehensive Williams collection will contain, besides numerous soundtracks and concert works, a sizeable collection of compilations featuring recordings of the concert versions of his film themes. Most (if not all) of the themes on this new album will feature at least once (I count five distinct recordings of the regular concert version of «Princess Leia’s Theme» and seven of the Schindler’s List theme in mine). And yet I expect Across the Stars will endure as a standout of his discography, not just because of its unique arrangements, but also its performances.

Skip the regular release, as the additional tracks on the Deluxe Edition are essential. Hopefully the missing «Devil’s Dance» will also see a release at some point (the Munich concert was broadcast on TV, so perhaps there is a chance of a video release as well). And Mutter still craves more, as she asserts at the end of the bonus videos: “More music!” Apparently she wants her own violin concerto now, but a second volume of Across the Stars wouldn’t go amiss either – after all, Cinema Serenade also had two, and Williams has enough themes left for any number of albums. 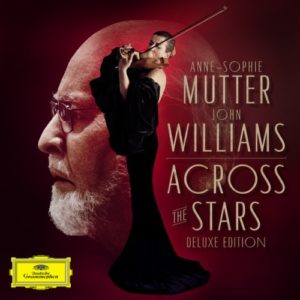