This year’s biggest and most divisive science fiction film is no doubt James Gray’s Ad Astra, a ‘space road movie’ of sorts, and a father-son parable, as astronaut Roy McBride (Brad Pitt) traverses the solar system to connect with his father and save the human race. Expectations were particularly high as Gray’s Apocalypse Now-inspired The Lost City of Z (2016) displayed a brilliant grasp of mystery, atmosphere and fabulations around the unknown.

Nonetheless, the movie has been seriously misunderstood. One the one hand, fawning critics lauded its alleged 2001-like, cerebral qualities, which really isn’t its ambition. On the other hand, negative reviews pointed to its seemingly random B-movie elements. The truth is somewhere in between – the film succeeds because it balances the two masterfully; it’s both a thrilling ride and a sensitive philosophical drama at the same time. A tricky balance to get right (and often misunderstood), but Gray hits the perfect notes.

Expectations were equally high for Max Richter’s score. Richter has risen from the ranks of post-minimalist concert composers to one of the most sought-after film composers of his generation after his breakthrough with Waltz with Bashir in 2008. He was particularly impressive in his gorgeous, religious-infused score for the TV series The Leftovers (2014-2017). While most of his music remained in Ad Astra, additional composers (most prominently Lorne Balfe) and existing pieces were brought in to complete the musical soundscape, for whatever reason.

The soundtrack for Ad Astra has an insane duration of 2 hours and 7 minutes, and is by no means a good listening experience as it is. People need to pull out their playlist skills, and make their own, more succinct curation of the material. They can do so by balancing the score’s two main ingredients – the ethereal beauty of space and the aggressive terror of space.

The first is unquestionably the highlight of this album – tracks like «To the Stars» (also released as a single), «A Trip to the Moon», «The Rings of Saturn» and in particular «Preludium» and «Erbarme Dich», the latter of which is Richter’s take on Bach’s composition by the same name from his St. Matthew Passion (1727) – a very distinct Artemiev/Solaris vibe going on here. They are broad and expansive in nature, perhaps with an added electronic pulse, and with a steadfast, forward momentum – much like McBride’s mission in the film.

The dissonant tracks are harder on the ears, but might allow for variation in the listening experience if placed properly and carefully. In particular, a cue like «Terra Incognita» employs a Ligeti-like use of choir and warped brass clusters that is both eerie and foreboding. Other examples are «Encounter» or «Forced Entry».

Lorne Balfe’s material kicks in from track 21 onwards, and is not on the same level as Richter’s; it resorts more to formulaic conventions and a more extrovert use of electronics and percussion. But tracks like «Rover Ride», «Orbs» and «Trip to Neptune» are quite good in and of themselves and could probably be inserted into the Richter programme in an organic way.

Finally, the album also includes a couple of pre-existing pieces, like Richter’s Interstellar-ish, 21-minute movement «Tuesday (Voiceless)» from his 2017 album Three Worlds: Music from Woolf Works. Get that album instead, and remove the track from the Ad Astra playlist. Also, a piece that is used at least twice in the film is Nils Frahm’s 8-minute «Says» from his 2013 album Spaces, a hardcore minimalist piece based on vast, undulating synth and piano figures. This one is well worth keeping in.

Much like the film, the soundtrack is a complex, tonal landscape to navigate, but if there’s any benefit to the overkill presentation, it’s that it allows the listener to make informed decisions about what to keep and what to discard. Without a properly curated album, that will have to do. If done properly, it’s certainly an album that has the potential to rank with, or close to the likes of Interstellar (2014) and Arrival (2016) in recent years. As it is, however, it loses a star because of the exaggerated presentation. 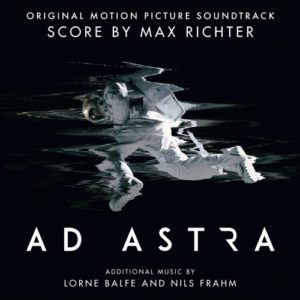