Wolfgang Petersen’s subversively delicious Air Force Once (1997) is an exciting, tautly told and nail-bitingly suspenseful affair, but also unusually violent for a popcorn movie; with several sequences that strain credibility. A group of communist radicals, led by a scene-chewing Gary Oldman, hijack Air Force One with President James Marshall (Harrison Ford) and his family on board, with the plan of using them as hostages for the release of their imprisoned leader. Marshall, it turns out, is an action hero as well as a president, capable of tackling terrorists in hand-to-hand combat and flying a 747 – something made at least remotely plausible by giving him a background as a Vietnam fighter pilot.

Air Force One has a complicated scoring history. Originally, the assignment went to Randy Newman, who would seem an odd choice for this kind of film. And indeed, his score was rejected by the filmmakers, after which Jerry Goldsmith stepped in and accepted the daunting task of writing a 90-minute replacement score in only three weeks. To manage the workload, he enlisted the assistance of Joel McNeely, who supplied around 30 minutes of score based on Goldsmith’s thematic material. A longtime admirer of Goldsmith, McNeely knew the veteran composer’s style well enough to emulate his orchestrations so effectively that both composers’ contributions emerge as a unified whole.

Originally available only as a short 35-minute CD upon the film’s release in 1997, an expanded edition of Jerry Goldsmith’s energetic score has long been on the wish list of many Goldsmith fans. Now, Varèse Sarabande has come to the rescue with this 2CD presentation of the complete score, plus a selection of bonus tracks.

Frustrated with having his meticulous orchestrations drowned out by increasingly loud and elaborate sound effects, Goldsmith simplified and streamlined his action writing a bit in the 90s. Even so, while not reaching the astounding complexity of his action magnum opus Total Recall (1990), Air Force One is still an expertly constructed and performed score. Goldsmith apparently worked very well under pressure. His music for Air Force One doesn’t break any new ground (there was hardly time for that), but there’s still plenty going on here, and there’s something to be said for the openness and clarity of Goldsmith’s writing in his scores from this period.

Fully symphonic with a modest use of electronic and choral embellishments, the score is rich in thematic material, including a rousing, heroic fanfare for Air Force One itself that is sometimes transformed into a percussion-driven action theme, an uplifting and patriotic main theme (so patriotic, in fact, that it has been used at U.S. presidential rallies), a warm, lyrical “family” theme for strings, woodwinds and piano, and darker, Russian-flavored, Prokofiev-inspired music for the villains, usually played by threatening, low brass.

For the numerous action sequences, brass and militaristic percussion take the lead, often driven by Goldsmith’s trademark use of exciting, odd- and mixed-meter time signatures. Tension and suspense is delivered by low, ominous, sustained strings, rhythmic low-end piano figures, and ticking electronics and percussion effects, most prominently heard in cues like «Hostage President» and «Empty Rooms».

The score’s standout cue is the eight-minute «The Hijacking», which is an example of what sometimes happens when you listen to Goldsmith’s best action music: When you think he cannot possibly squeeze more intensity out of a cue, he does just that, adding still more layers with massive brass lines and hits, exciting, syncopated patterns in trumpets, and thundering, propulsive percussion. Remarkably, everything still sounds clear and uncluttered throughout. The final two minutes are genuinely pulse-pounding, played with marvelous gusto by the Hollywood studio musicians. The tracks «Escape from Air Force One» and the previously unreleased «The Dogfight» (by McNeely) reach almost the same energy level. Bruce Botnick’s spacious but detailed recording also adds to the enjoyment here.

While the original, shorter album is a well-sequenced, tight presentation of many of the score’s highlights, and one and a half hours of action music can be potentially exhausting, the many variations Goldsmith and McNeely draw out of the thematic material and the transparency of their orchestrations make also the complete presentation of the score an entertaining and worthwhile listening experience.

Varèse Sarabandes 2CD Deluxe Edition is currently not availabe for streaming, but the original album is on Spotify (below). 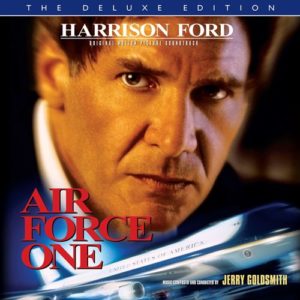