I frankly cannot remember watching Lee Tamahori‘s psychological thriller Along Came a Spider (2001); whether that’s because I never saw it or because I found it forgettable, I do not know. The film was a box office hit, starring Morgan Freeman at the height of his success, reprising his role as detective Alex Cross from Kiss the Girls (1997), although it received mixed-to-negative reviews.

New Zealand director Lee Tamahori first garnered critical acclaim with the Maori drama Once We Were Warriors (1994), which was followed by the stylish period crime mystery Mulholland Falls (1996). For the outdoors action adventure The Edge (1997), Tamahori teamed up with veteran film composer Jerry Goldsmith, before reuniting on Along Came a Spider a few years later. The director and the composer must have had a decent working relationship, since Goldsmith is the only composer Tamahori has worked with more than once.

The music is founded in Goldsmith’s late-era economical mode. It contains many of the composer’s typical mannerisms such as odd-metered rhythms, electronic drum bursts, and striking synth textures. The latter are among Goldsmith’s more successful, are well enough integrated into the mainly orchestral score, and significantly elevate some of the tracks. The main thematic material cannot be accused of being very original nor elaborate, but originality is rather found in the synth elements and unconventional use of instruments. Performances are good and I have no reservations regarding the quality of sound, which is focused, full-bodied, and with a good presence.

The first track, «Night Talk», is mostly low-key, but introduces a creepy synth element that sends associations to a busy spider. I like to be surprised by sudden turns in the music, but when the turn is away from a promising build-up, such as briefly into the second track «Testing», it’s more disappointing than fun. The track eventually gets back on track, and we get more of the same momentum in «Meghan’s Abduction». That’s the first track that really caught my attention, with its clearer direction of development.

The album never really builds towards a climax; instead, we get climactic cues interspersed among mainly low-key suspense tracks. There’s not much development within the latter, which focus more on interesting, unusual sounds, although there’s some tenser writing such as in «The Missing Picture». Things seem to get off the ground with «The Ransom Pt 1» and «The Ransom Pt 2», which are quite repetitive but still interesting, but then the music subdues again until the score culminates in the increasingly tense ten minutes of «Not My Partner/The Ransom», which works like a suite of music from the score. To the reviewer, it was interesting to notice a few details scattered across the album foreshadowing James Newton Howard’s score to Signs the year after.

Varese Sarabande’s complete score to Along Came a Spider is worth checking out, but I suspect that the old, original soundtrack is an easier listening experience with probably the necessary highlights. The score does not sound like Goldsmith put his greatest efforts into it, but most of the time it’s characteristic enough to offer details for the brain to latch onto, and the highlights are satisfactory if not outstanding. Add to that the excellent sound, and we have a solid release.

The album is not available on Spotify, but can be purchased at the Varese Sarabande website. 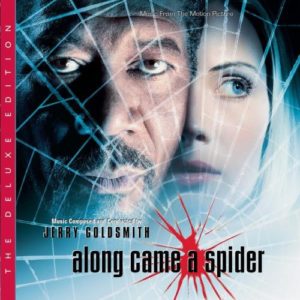