David B. Parker’s Art of Darkness (not to be confused with the 2012 horror movie by the same name!) is a feature documentary from 2014 about painter and performance artist Bryan Lewis Saunders. Mr. Saunders is committed to produce a self-portrait every day, and the number now totals more than 10 000. As a person with admitted psychopathic tendencies, Saunders narrates the story about how he uses art to tame his inner demons.

The film received limited distribution, but the drug-infused self portraits allegedly turned him into an online sensation, and he has subsequently received somewhat of a cult status. The documentary is currently available on Youtube.

The film features a score by Romanian-Canadian composer Catalin Marin (b. 1970). It had its premiere release in 2020, when British electronic music label AD Music offered it as a download-only album; rerecorded, rearranged and remastered. Marin has formerly put out a solo album on the label, and has scored numerous film and TV projects since 2007.

The Art of Darkness soundtrack album features 10 tracks, totalling 41 minutes of playing time. It’s an electronic/acoustic hybrid score that often combines suggestive, ambient moods with several solo instruments – most prominently the violin. The title track, for example, begins with moody sounds that eventually give way to staccato guitar riffs, cool and suitably dark, Wurlitzer-like synths, before a violin caps it off with an acoustic ending. Similarly, «Turns In The Road» is guitar-led over a bed of strings, featuring what is probably a harp, with a big and powerful ending.

While the majority of the score is melodic, some segments – presumably those mirroring Saunder’s disturbed state-of-mind – are more experimental in nature: «Hide And Seek» and «Universal Language Of Pain», for example, are less friendly on the ears; more percussive and harsh. But the album is a constant mood shifter: «Happy Child» is a melancholic keyboard theme with strings and rhythm programming, while the harp returns in «Never Miss A Day» – a tasteful and elegant track in the style of Steve Jablonsky.  In «Same But Different», there are shades of Thomas Newman with its odd percussive meter; a track that sadly doesn’t develop enough. «The Way It Should Have Been» has a tinge of sadness to it, before the theme from the title track returns in «Twisted».

In short, Art of Darkness is an engaging listen that constantly oscillates beween electronics and acoustic solo instruments, between experimental and conventional and between violence and beauty – as conflicted as the man it portrays.

It’s a fine addition to the AD Music catalogue, and – as far as I know – the first soundtrack album on the label. The composer and AD Music have tried to make the album as listenable as possible, with all tracks clocking in between 3 and 5 minutes. Let’s hope they continue to release soundtracks. 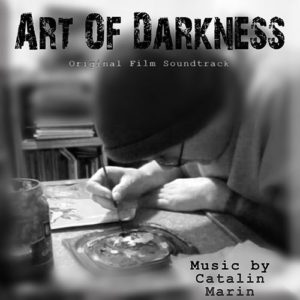