A quarter of a century has passed since Michael Bay’s  tongue-in-cheek action comedy Bad Boys (1995), starring Will Smith and Martin Lawrence, and produced by the legendary duo of Jerry Bruckheimer and Don Simpson (in what was one of Simpson’s final productions before his death in January-1996). Composer Mark Mancina had had a massive breakthrough with Jan de Bont’s Speed in 1994, and was happy to write the highly catchy, fun and memorable score for Michael Bay’s feature film debut. For its sequel, Bad Boys II (2003), Mancina clashed with director Bay and producer Bruckheimer, and the composer left the film, giving Trevor Rabin the chance to deliver the goods. The Bad Boys II score is quite forgettable, as Bay didn’t want the theme from the first film to reappear in any shape or form.

17 more years have passed, and the second sequel, Bad Boys for Life (2020) is finally in theatres. Bruckheimer, now 76, is still onboard, with directing duties handled by Belgian-Morrocan duo Adil El Arbi and Bilall Fallah. Mark Mancina and Trevor Rabin are no longer A-list film composers (Rabin hasn’t done a feature film in 5 years), so the scoring gig went to scot Lorne Balfe (b. 1976), who clearly is the “flavour of the decade” in Hollywood, having worked on around 30(!) feature films since 2013, several for Bruckheimer. Balfe, an associate of Hans Zimmer, started working for the German super composer around 2005.

There is a soundtrack album for Bad Boys for Life featuring the obligatory rap songs, but thankfully Sony Classical decided to do a score-only release too, although only in the dreaded digital format. It features 12 tracks, totalling 40 minutes of music. The first track, named after the title of the movie, goes straight into Mancina’s theme for the original, but with an added choir. The rhythm section is tight and groovy, but I immediately missed the acoustic guitar featured in Mancina’s original (performed by the composer himself). The tense «It’s Good Shit Lieutenant» features massive percussion, choir and the notorious “braaaaaam” sound – generally attributed to Zack Hemsey, but frequently associated with Zimmer in scores like Inception; far too noisy for repeated listenings.

«What Else You Got?» incorporates ethnic flutes, in a track that should have had Mancina credited as co-composer; that’s how close it sounds to Bad Boys. «Prayer» is a sad-sounding cue with tasteful choir, but again I miss the acoustic guitar that worked like magic in the soft cues of the original. A hint of Vangelis can be heard in «The Truth», while «Promise To God» contains a nice synth-backing to an otherwise elegiac track. «We Ride Together, We Die Together» sounds unmistakably like the first track, and I get the sensation that Balfe hasn’t spent an enormous amount of time writing original music for the film. Hints of Steve Jablonsky can also be heard here. The action music in this score is of the usual, not-too-interesting calibre, but thankfully doesn’t go on and on like on some other over-long releases.

Lorne Balfe deserves considerable praise for having brought the Bad Boys theme back for this film, after its conspicous absence in Bad Boys II. Also kudos to Sony Classical for releasing the score on its own so it can be heard and enjoyed outside the film. While not a total homerun for Balfe, it’s most certainly a job well done. 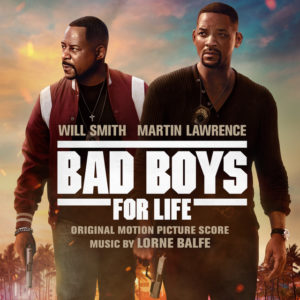