IMDB describes the plot of the 50-minute, low budget science fiction film Blood Machines (2020) thusly: “An artificial intelligence escapes her spaceship to turn into a female ghost and challenges two blade runners to a galactic chase.” And indeed, the trailer suggests a trippy, cosmic opera harkening back to 80s aesthetics. Blood Machines is the brainchild of French directors Raphaël Hernandez and Savitri Joly-Gonfard (under the pseudonym Seth Ickerman), crowdfunded, and a sequel to the duo’s lavish 2016 music video «Turbo Kills».

The film made its rounds in niche festivals in the latter half of 2019, but unless you were there, or were one of the Kickstarter funders that received the film digitally, it’s difficult to find and see. From what I know, it has yet to find a distributor for a wider release.

The music is by French synthwave composer Carpenter Brut (a pseudonym for Franck Hueso), who also scored «Turbo Kills». Brut has made several studio and live albums, but is perhaps best known for his original contributions to the 2016 video game Furi (incidentally another strong synthwave recommendation). As his name suggests, his music is inspired by John Carpenter, metal and 80s horror stylings, leaning – perhaps – more towards the darker spectrum of the genre (or darkwave, as it is also called).

Blood Machines is simultaneously lush and zithering as it takes the best from the 80s and combines it with more contemporary recording techniques. But it’s not altogether a funky, melodic listen evoking the grandeur of cosmos. Unlike many of his synthwave colleagues, Brut is fond of inserting noise and fuzz into the mix, sounding – at times – closer to the alternative rock undercurrents of bands like Toydrum.

The 36-minute album really feels like three parts, wherein the first and last are the best. The opening of the album, i.e. the first two tracks, are goosebump-inducing – both in and of themselves, but also in the way they segue from one to the other: «Intro» is a spacey, oscillating figure that suddenly and organically gives way to a hardhitting, dark beat in «Blood Machines Theme», complete with undulating organ and metal-like fuzz. This is mirrored at the end of the album, with the epic, 7-minute «Grand Final» – half exploratory, half beat-based (the best track on the album, no doubt), and the “space metal” indie ballad «Gone Now».

The middle of the album is a more challenging affair, however. Darker, deeper and more ambient, with noisy filters muddying the waters, like «The Ceremony» (reminiscent of artists like Toydrum and Disasterpeace, or the more abstract parts of Blade Runner 2049). But right in the middle of this material is the expansive «Souls Wreck» with male choir, organ and a pronounced Vangelis vibe that allows you a necessary breather.

The album is short enough to have a sustained concept feel, and seems perfectly structured for best possible listening experience. Granted, some of the noise-induced tracks are a bit hard on the ears, with a relatively narrow dynamic range, but it’s definitely something that makes me curious about the film; it seems like a wild, hallucinogenic ride. Let’s hope it gets wider distribution. 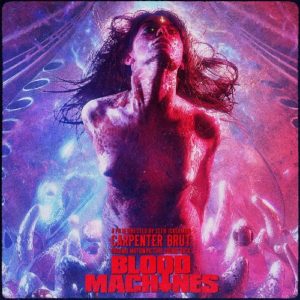