Breathing Fire was a 1990 action/martial arts movie directed by Lou Kennedy and Brandon De Wilde, the only film they ever made. It starred a bunch of unknown actors (with the possible exception of The Goonies and Indiana Jones and the Temple of Doom star Ke Huy Quan) and had a plot concerning bank heists and Vietnam vets. It was a remake of the 1977 Hong Kong film The Flash Legs.

Record label Perseverance Records has now decided to release the previously unreleased score by Paul Hertzog on CD, as a 300-copy limited edition, where the first 100 copies are numbered. It is also available as a download. Breathing Fire is considered part three in Hertzog’s “Martial Arts Trilogy”, following the more well-known scores to Bloodsport (1988) and Kickboxer (1989). Perseverance Records was also involved in those two releases.

The album features the complete score from the film, more than an hour of music (34 tracks), and also includes two pages of amusing and informative liner notes from the composer where he shares a story of a very hot Asian soup he had to eat before he was deemed worthy to score the film. Hertzog took the scoring assignment dead serious, and worked tirelessly 16 hours a day for three weeks, on all the different scenes of the film, only assisted by engineer George Seymour in the studio.

There were probably people in the late 80s who believed Paul Hertzog was another German synth film composer who came to Hollywood to score movies, like Harold Faltermeyer, Tangerine Dream and Hans Zimmer. But Hertzog is American, although he stole a trick or two from some of those European legends.

The Breathing Fire soundtrack can loosely be separated into three parts: The first features quite a bit of atmospheric “sneaking around” music, the middle is more melodic, poppy and up-tempo, while the third features the action music. The sound quality is as good as can be expected from 30-year-old music files. «Kill ‘Im» features a wonderful acoustic guitar sample which also appears in «Annie», but it’s not until track 10, «David», that the main theme (somewhat similar to Bloodsport) with the shakuhachi-sampled, oriental flute sound can be heard. «Bad Leg» sounds like a mix of Faltermeyer’s «Memories» from Top Gun and the guitar synth of Jan Hammer, while «Plots» includes an effective percussion sample somewhat reminiscent of Brad Fiedel’s Terminator. «Stop Alan/Stop Bolo» is a very fine action track that builds in intensity over 3 and a half minutes, while the 4:15 closing track «Brothers» is probably the best track on the disc, with Hertzog showing off some great synth solos.

Breathing Fire is absolutely a varied album with different moods playing throughout. Paul Hertzog once again proves that he was a film composer to look out for in 1990, which makes it even more puzzling that this became his final score — his phone stopped ringing completely after this (did he have a bad agent?), and he had to switch careers and become a teacher. Considering that many “80s” film composers, some of them maybe less talented than Hertzog, continued getting work in Hollywood at least until the mid 90s, this is a pity. All of this was probably not helped by the fact that Breathing Fire didn’t premiere in the US until July 1992, and went straight to video.

Thanks to Perseverance for releasing this, which seems to be the last Paul Hertzog score that will ever see the light of day, according to the composer himself. Which means that his enjoyable score to 1988’s Dangerous Love will stay in the vaults forever. Fans hungry for more music by Paul Hertzog should check out his solo albums Freeing the Waters and Waking the Dragon. 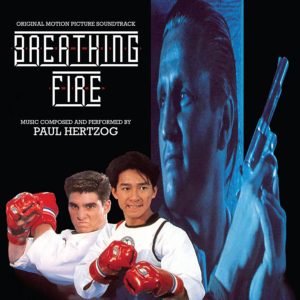