Cobra Kai (2018-) is a 10-episode webseries distributed on Youtube Red, and a sequel to the iconic The Karate Kid movie series from the 80s and 90s – with Ralph Macchio reprising his role as Daniel Larusso and William Zabka as his nemesis Johnny Lawrence from the first film. Now middle-aged with their own families, their lives have taken very different paths over the last 30 years. Daniel is a successful car salesman, Johnny is down on his luck and slightly more sympathetic than the last time we saw him. As the old Cobra Kai student decides to reopen a karate dojo, old tensions seem to surface once more.

The series is yet another example of contemporary rekindlings of 80s nostalgia, but done with heart and skillfull writing that rarely resorts to cheap gimmicks – a perfect continuation of the sentiments of the original John G. Avildsen movie.

Composers Zach Robinson and Leo Birenberg were new acquaintances to me, although I was slightly familiar with Birenberg’s score for Red Army (2014). Their backgrounds are mostly in short movies and lower-profile television shows, although both have provided additional music and other duties for high-profile movies like Edge of Tomorrow (2014), Ant-Man (2015) and The Shape of Water (2017). Cobra Kai, however, seems to be their breakthrough assignment as solo composers.

There is no question that the musical highlight of Cobra Kai comes about midway through the series, at a crucial moment, where Bill Conti’s original Karate Kid theme plays in full glory (of love). A couple of other original Conti themes appear in subsequent training montages and nostalgia moments. Unfortunately, none of this appears on the soundtrack – but they are of course already available in the lavish 4CD Karate Kid score box set released in 2007.

Robinson and Birenberg’s original score seems to pay appropriate homage to the Conti score – especially in the more lyrical moments like «Miyagi Memories» or the climactic rock-cum-classical pieces like «The All-Valley Tournament». There are also delicious musical callbacks to the decade, in funky synthrock cues like «Slither» or hairy power rock in tracks like «Strike First» or «A Badass Name for a Dojo» – complete with guttural vocal outbursts and heavy electric guitar riffs. Unfortunately, several of the other tracks adher to less interesting contemporary stylings – either soft, aimless cushions or non-descript percussion ostinati, like «Time Out». With so many short tracks, the end result is very uneven.

At its best, the Cobra Kai album is ripe with nostalgic funkiness and delicious odes to the Conti score. At its worst, it wanders more aimlessly somewhere inbetween. Since the episodes are so short (20-30 minutes), it would perhaps have benefitted from a more consistent soundtrack presentation, either through newly formed suites or by weeding out some material. However, it nonetheless belongs among the better hybrid representations of 80s stylings in recent times, and will hopefully be explored further in a second season. 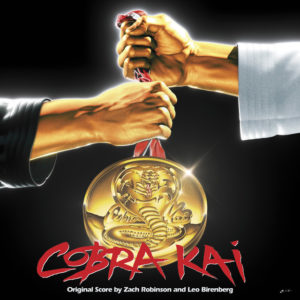