Dickinson is a series created by Alena Smith for the Apple+ streaming platform. It made its debut in 2019, while the second season started airing on January 8, 2021. It’s a freely interpreted excursion into the life of famous author Emily Dickinson, as portrayed by Hailee Steinfeld, that uses contemporary sensibilities to add a sense of actuality.

While I haven’t yet been able to see the series myself, it has generally received positive reviews. Troy Patterson of The New Yorker argues that “the show works hard to reinvest Dickinson’s most familiar lines with a surpassing strangeness /…/ What’s more, the show makes Dickinson’s strangeness familiar in its grasp of her artistic spirit, her blazing way of putting interior blisses in tension with eternal agonies to forge an intimate bond with green Infinity.” Libby Hill of Indiewire is particularly impressed by the second season: “If Season 1 was promising, but uneven, then Season 2 is entertaining, but uneven, with the whiplash between brilliance and boredom being far more stark now that it appears to be a feature and not a bug.”

The music of the series is composed by spouses Ian Hultquist and Sofia Hultquist (the latter using her stage name Drum & Lace). Ian Hultquist previously impressed me with his synthwave score for the tech documentary Silicon Cowboys (2016), one of the highlights that year. Both have eclectic backgrounds ranging from classical education to indie bands to electronic music and trip-hop. They also previously collaborated on the documentary The First Monday in May (2016).

Befitting the show’s idea about inserting contemporary elements into a 19th century setting, the score is electronic and modern – floating ethereally above the proceedings. Each of the two seasons have received generous, digital soundtracks that come together as concise listening experiences.

The season one soundtrack is more upbeat in tone. This is not synthwave, strictly speaking, even if it flirts with the genre on occasion. Rather, I’d put it in the same category as Johnny Jewel, Hit’n’Run or M83, i.e. dreamy, ambient soundscapes, often with voices, funky breakbeats (Drum & Lace’s trip-hop background gets its workout!) and steely guitars and sequencers – on display in tracks such as «Meet Me in the Orchard», «Love Me More» or «Don’t Meet Your Heroes». These tracks are almost inquisitive in nature, as if they’re mirroring Dickinson’s own curiousity about the world around her. Interspersed for variation are more retro, beat-based tracks that verge closer to synthwave, like «Volcano» and «Faux Sick». While most of the tracks are relatively short, the Hultquists have managed to spread them out and combine them into a coherent whole.

The season two soundtrack is obviously in the same mold, but leaning more towards a melancholic or lush sound, as if it’s commenting on the title character’s maturation – like in the Susanne Sundfør-inspired song «Split the Lark», featuring Ella Hunt on vocals, or the much-too-short, but aptly named «Ultimate Fantasy» (with shades of worldbeat). With fat, spacey chord leaps, it’s a more introvert affair than season one’s extrovert enthusiasm, but one that will grow on you after repeated listenings.

The Hultquists draw their electronic elements from a wide variety of sources, and combine them to say something about the title character’s evolution. In a time where retro synth scores are now also being applied anachronistically in film and TV (Lucas Vidal’s Dime Quién Soy [2020-] is another example), this remains a newfound favourite. 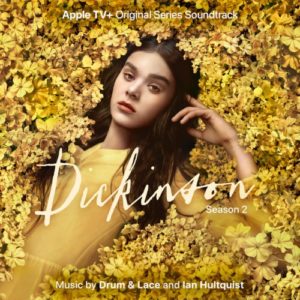