Fletch, directed by Michael Ritchie (who died in 2001, only 62 years old), is an iconic 1985 crime comedy starring Chevy Chase as the eponymous news reporter who is approached by a millionaire to murder him as a way to escape his cancer diagnosis. This, it seems, is easier said than done, and Fletch quickly unravels irregularities in the millionaire’s past.

The filmmakers originally hired American composer and saxophonist Tom Scott to write the score (he’s even credited in the film’s first trailer). For unknown reasons, however, Scott’s score was rejected, and German synthesizer wizard Harold Faltermeyer, then 32 and fresh off the massive success with Beverly Hills Cop (1984), received an offer to write a new score. Faltermeyer had already started working on Top Gun (1986), but he could not resist the opportunity to do Fletch. Ritchie mostly left the composer to do his own thing, and the film premiered May 31, 1985. MCA released the soundtrack album on LP and cassette at the time, but it was not until October 2018 that a CD first saw the light of day on Varese Sarabande, including 6 pages of liner notes by Daniel Schweiger. They also released an LP reissue.

The Fletch soundtrack album features four tracks of instrumental underscore. The «Fletch Theme» is even better than Beverly Hills Cop‘s «Axel F.», with Faltermeyer’s Roland and Oberheim synths making it all sound more digital and slick. There was even a music video made, featuring Harold plodding away on his keyboard by the seaside in Los Angeles.

«Diggin’ In» is incredibly catchy and bouncy, with some interesting samples thrown in, while «Exotic Skates» somehow reminds me of George Michael’s «Father Figure» in the construction of the melody. Pure bliss! «Running For Love» may not be the best love theme Faltermeyer wrote, but it features a sweet but short sax solo, and the vocal version is sung by Australian John Farnham, a year prior to his worldwide smash hit «You’re The Voice». The lyrics are written by Tom Whitlock, a usual suspect in Faltermeyer’s 80s period. The composer also wrote and produced «Bit By Bit» («Theme From Fletch»), performed by Stephanie Mills. It’s a catchy song, but the vocals leave something to be desired.

Elsewhere on the album, there is the enjoyable «Fletch, Get Outta Town» sung by Dan Hartman. This clearly sounds like a Faltermeyer tune, but it’s actually written by Hartman and Charlie Midnight, who wrote James Brown’s «Living In America» for Rocky IV the same year. Hartman also performs the gallopping «Name Of The Game», written in 1984 and nowhere to be heard in the film. Also Kim Wilde’s 1984 synth pop song «Is It Over» is only on the album. «A Letter To Both Sides» by The Fixx is more in the alternative pop/rock vein, produced by Rupert Hine and bearing certain similarities with The Police.

The album clocks in at 36 minutes, and it’s unquestionably disappointing that Varese didn’t include any bonus tracks on the CD. Some additional score tracks would have been fantastic, or at least some song/score remixes (of which there are many), but no such luck. Fletch got a sequel in 1989, again directed by Michael Ritchie and scored by Harold Faltermeyer, but no soundtrack album has so far materialized, even if there are rumours of something in the works. The director also worked with composers like James Newton Howard and Michel Colombier in the 80s and 90s, displaying his taste for contemporary studio-based scores of the highest class.

Fletch is currently not available on Spotify, but the album can be purchased at Varese Sarabande. 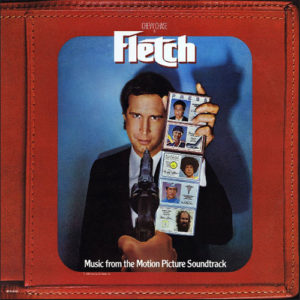