Four years after the 1985 hit movie Fletch, director Michael Ritchie and Universal Pictures decided it was time to pay Irwin Fletcher another visit, with Chevy Chase once again displaying his hilarious comedy schtick. In Fletch Lives (1989), the Los Angeles reporter receives an inheritance in Louisiana, and as he heads to the Belle Isle plantation to retrieve it, trouble abounds.

This movie, along with National Lampoon’s Christmas Vacation (1989), marked the end of a golden decade for Chevy Chase, and the actor never quite managed to reach the same heights later in his career. The same applies to composer Harold Faltermeyer, who ended a phenomenal five year-period with Fletch Lives and Tango & Cash (1989), before he returned to Europe and basically fell off the Hollywood A-list of in-demand film composers.

There was never a soundtrack album for Fletch Lives. Until now. 30 years after the movie came and went in the theatres, La La Land Records decided it was time to redeem the mistake as part of their Universal Pictures Film Music Heritage Collection. On June 11, 2019, Fletch Lives finally became available as a 3000-copy limited edition CD, running for 38 minutes (22 tracks), including 16 pages of liner notes written by the ubiquitous Daniel Schweiger.

Let’s be honest: Harold Faltermeyer did not write a lot of new music for Fletch Lives. His iconic «Fletch Theme” from the 1985 film appears in more than half the tracks, so the listeners of this CD may feel a little cheated in the absence of so little original material. But I guess that was what the filmmakers wanted, and it was probably a wise commercial decision. What new is here, however, is good.

The album starts off with the «Fletch Lives Main Title», an ultra-catchy theme in minor that reminds me of French synth wizard Jean Michel Jarre. «Fletch Walks» is somewhat of an eye-opener, an acoustic blues track with guitars, almost like a forerunner to Hans Zimmer’s Thelma & Louise (1991). What is remarkable about a track like «Sneaking Into Amanda’s/Following Shadow» is the fact that Faltermeyer always manages to write exciting suspense music, thankfully devoid of film music clichees like screeching strings and stingers. God knows we get enough of that from other composers.

The longest track on the album is «Coon Hunt» (4:05) with stylistic elements from Tango & Cash, while «The Kiss» and «Another Kiss» offer a welcome pause from the «Fletch Theme» with a wonderful love theme. A pity, though, that Faltermeyer is not allowed to develop this motif into a longer track, when we know how good he is with these kinds of themes. «Toxic Dump Walk/Drive To Ham’s» offers a gorgeous snippet of «Diggin’ In» from the first film, while «Chase To Bibleland» is a solid 3-minute track full of excitement and energy.

The album also features several source music tracks, where Harold plays around with gospel and jazz. «Over The Waves» is actually composed by Juventino Rosas and arranged by Faltermeyer, and is slightly reminiscent of Thomas Newman’s score to 1989’s Cookie. «TV Source» is suspenseful and experimental, an interesting two minute track, before the album closes with two songs: «Kings Of The Road» is an almost frighteningly bad rock number performed by Martin Nethercutt, while «Make A Change» by Buckwheat Zydeco is both  annoying and gratuitous. Buckwheat Zydeco wrote no less than eight songs for Fletch Lives. Thankfully, only one of them appears on this album.

Harold Faltermeyer actually recorded his Fletch Lives score in his studio in Munich, a long way from Tinseltown. He had already more or less left Hollywood behind to raise his children on home soil and would only return occasionally to the States. Several sources (including Schweiger’s liner notes) indicate that he will work with Hans Zimmer on Top Gun: Maverick (2020), but untill that hopefully becomes a reality, we can – for the first time – enjoy his Fletch Lives score in crystal clear sound, rescued from oblivion by La La Land Records.

Fletch Lives is currently not available in streaming format, but can be purchased at La La Land Record’s website. 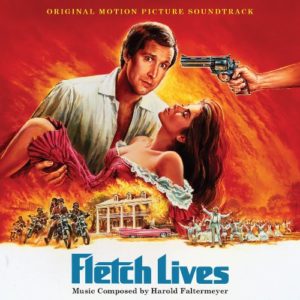