Flinch (2021) is the feature film debut of director Cameron Van Hoy, a Californian born in 1985 who is also an actor and producer. It tells the story of a hitman who develops feelings for a girl that  witnesses one of his murders. It opened in select US theatres on January 15, and on streaming platforms January 21st.

Initial reviews have been mixed, and it hasn’t yet been picked up by major publications. However, Robert Kojder of Flickering Myths argues that «Flinch is simultaneously uncomfortable and misguided (regardless of its far too late last-ditch effort to flip the story upside down)», while Brianna at Nerds and Beyond is more positive: «Flinch is a fresh approach to the classic “hitman’s job goes wrong” thriller that will ask viewers what happens when said hitman faces a moral dilemma when there is a seemingly innocent witness».

For the musical score, Van Hoy hired the one-man synthwave project Miami Nights 1984. The man behind this name is Michael Glover from Victoria, Canada, who first came to the scene in 2010. An interesting side note is that one of the film’s actors is Steven Bauer, who appeared in 80s movies Scarface (1983) and Thief of Hearts (1984), two films featuring musical scores (by Giorgio Moroder and Harold Faltermeyer respectively) that the synthwave genre is based on.

The soundtrack album for Flinch is available as a download-only release, totalling 19 tracks of music and clocking in at 54 minutes. Most of the tracks are on the short side, but there are also some lengthy 6-8 minute cues. It’s a score that carries its references on its sleeve, like the Tangerine Dream-like sequencers on display in «Intro». «The Girl», similarly, is reminscent of the track «Go To The Head Of The Class» from the 1987 movie Three O’Clock High. Other references include Jan Hammer’s Miami Vice, especially «Doyle» with a gorgeously relaxing and melodic theme – far too short at 1:29! Eventually, the album takes a darker and less listener-friendly turn with «The Job» and «Getting Messy».

As previously noted, there are a few longer tracks that allow room for development. Running for more than 8 minutes, «Escape» is the longest track on the album. Monotonous sequencers segue into a more ambient and relatively unexciting part before it gets more dreamy towards the end. «Surprise» is almost 7 minutes in length, but it’s more of the same. Simply put: There is too little variation, even though the soundscape is pleasant enough in and of itself. The penultimate track «Extended» includes some metallic Terminator-like sounds and a drum machine before it all ends with «Bang Bye», again somewhat similar to Tangerine Dream and their «Flash Final» from Firestarter (1984).

Using the synthwave genre as film music is a splendid idea, and there are many recent examples of such, but Flinch is not among the very best. On the other hand, we must take into account that this is Miami Nights 1984’s first feature film score, he has only scored a few short fllms before. So it will be exciting to follow his career into the future. 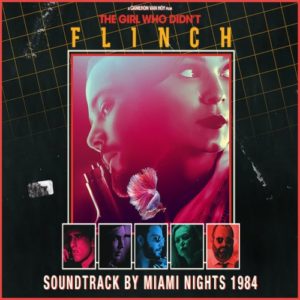