Danish cinematographer-turned-director Mikael Salomon’s entertaining and fast-paced action film stars Christian Slater as an armored car guard on the run from a gang of robbers, led by Morgan Freeman. The setting is a flooded Midwestern town, with suspense added by a nearby dam near the point of breaking. The plot is somewhat by-the-numbers, but visually, the film is impressive, with a seamless and convincing – at least for a 1998 movie – mix of digital and miniature effects, and live-action photography. Along for the ride is Christopher Young, with a score that is even more dynamic and entertaining than the movie.

As Jeff Bond mentions in his excellent liner notes, the film was a troubled production. The story required that practically every interior and exterior set had to be flooded with several feet of water, which in itself created logistical challenges, but also demanded considerable stamina from the actors. And the fact that Christian Slater started a 90-day jail sentence, on drug and assault charges, simultaneously with the film’s release was probably something the publicity department could have done without.

But composer Christopher Young comes from the assignment unscathed, delivering what was at that time among his biggest and most ambitious orchestral scores. Having scored films since the early 80s, Young is probably most known for his horror scores, supplying both bone-chilling and grand accompaniment to films like Hellraiser, Species and The Grudge. However, with well over 100 titles now to his credit, he has scored film and TV projects in every conceivable genre: dramas (The Shipping News, Creation), comedies (The Man Who Knew Too Little, The Rum Diary), crime thrillers (Copycat, The Informers), romances (Sweet November, Love Happens), fantasy (The Monkey King 1 and 2), and science fiction (Def-Con 4, The Core).

The original 51-minute Hard Rain soundtrack was an unrelenting, high-octane affair, and you won’t find much more respite in La-La Land’s new 78-minute reissue. The score itself clocks in at 60 minutes, with the remainder comprising alternate versions of some of the cues. Hard Rain is a film that does not require – or leave much room for – the composer to communicate what goes on inside the characters’ heads; Young’s task is instead to add propulsion to the physical action and give momentum to the natural forces at play – which he does with a lot of gusto.

Young writes for a traditional symphony orchestra, but augments it with a big percussion section, both acoustic and electronic. The score’s main theme, as introduced by French horns in «Main Title», is broad and portentous, but overall, the score has tremendous energy and pumps away with every beat of the action. The London Metropolitan Orchestra has plenty to do, although the energy is not primarily supplied by sheer volume, but by the intriguing rhythms the composer incorporates in almost every cue. While the score rarely strays far from its basic action and suspense mode, Young keeps things interesting by constantly twisting and varying the rhythmic figures, with some tracks almost becoming toe-tapping. Occasionally, the rhythms even veer towards jazz, as in «Church Chase». Naturally, Young’s extensive array of percussion plays a big part here, but brass and strings are equally important in delivering rhythmic drive.

At times, the score has a slight Jerry Goldsmith vibe, which makes sense: Goldsmith was an early inspiration for Young, and the veteran composer was in fact in early talks to score Hard Rain, before Young got the assignment. Young is far too skilled to actively copy or plagiarize anyone, but some aspects of his score – the horn-led main-theme, the odd-meter time signatures, and some other orchestrational and harmonic traits – would not be unexpected in a Goldsmith action score from the same period.

While staying mostly in the tonal and consonant realm, the score also has just enough dissonant, off-kilter harmonic colors and twists to tickle the ear and keep you engaged. This applies not only to sustained chords in suspenseful sequences, where it’s to be expected, but also within the rhythmic figures in the action writing itself. In a couple of tracks, there’s even some wild, aleatoric atonality («The Jail Cell», «He’s Back»).

A bluesy harmonica would seem an unusual instrumental color for this kind of score, but Young uses it (performed in part by harmonica legend «Toots» Thielemans) in the score’s few laid-back segments both for the Morgan Freeman character and to illustrate the American heartland where the action takes place.

A somewhat frustrating aspect of some of Young’s scores is that his cues often establish an anticipatory mood that makes you expect some kind of thematic or harmonic redemption later, but this never comes – that unresolved quality remains throughout the tracks. But in Hard Rain, while mostly sticking to minor keys, Young’s open and direct writing makes that problem nonexistent.

Another problem that Young skillfully avoids is that in many action scores –  by any composer – exciting, pulse-pounding tracks often have no real ending; they just stop abruptly and peter out on a sustained, decrescendoing chord, for instance when sound effects take over, or they change mood completely mid-cue because the scene also shifts. But here, Young frequently supplies satisfying, slam-bang conclusions, as in «The Ski Jet Chase (part 1)», «The Dam Breaks», «The Church Attack», and others.

While most of the tracks are fast-paced and driving, some of them have a more measured, heavy feel, like «The Jail Cell», «Church Chase» and «Tom Rescues Karen». Young illustrates the unstoppable power of the water with deep, lumbering rhythms and massive sounds from an enlarged brass section (including eight French horns).

But this score is far from dark and brooding. It won’t get on your list of go-to soundtracks for a quiet, meditative hour, but its constant energy is infectious, and it sounds like Young had a great time writing it. To turn a basically uncompromising action score into something as listener-friendly and entertaining as this is no small feat.

The album is not available on Spotify, but can be ordered from La La Land Records’ website. 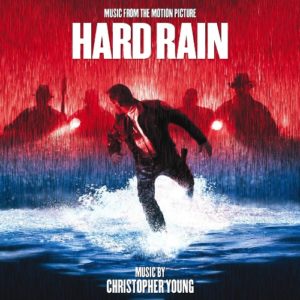