Now available on Netflix, Jérémy Clapin’s I Lost My Body (J’ai perdu mon corps) is an animated French film from 2019 that first premiered at the International Critics’ Week in Cannes, and that was later nominated in the category for Best Animated Feature Film at the 92nd Academy Awards. It’s a moving, poetic fable about a severed hand traversing Paris to reunite with its owner, a young man named Naofel.

In essence, it’s a film about loss and coming to terms with one’s past, in Naofel’s case a fatal car crash that killed both of his parents, but left him alive. While the story is told in flashbacks, the hand becomes an image for the need to re-connect with the world; with love and with future aspirations. Typically of French animation, it’s beautifully drawn, with dancing snowflakes, soft backgrounds, expressive character movements and a slowmoving, reflective pace. Using simple, universal symbolism, much like Michaël Dudok de Wits The Red Turtle (2016), it captures inner turmoil by externalizing them in striking, visual tableaux.

The music is composed by Dan Levy (b. 1976) – not to be confused with the actor-director of Schitt’s Creek fame. One of the two members of The Dø, a Finnish-French indie band formed in 2005, he has sporadically done film scores since 2001. This, however, remains his big breakthrough on the international scene.

Just as the movie moves slowly and introvertly through its story, so – too – does Levy’s score address the melancholy and sense of loss through a combination of minor-mode harmonies and minimalistic electronic figures. It’s all very French!

This main idea is presented in the first track, «J’ai perdu mon corps» – a repeating, ascending figure accompanied by descending, synth string harmonies. Bits and pieces of these elements are then varied throughout the score – sometimes, almost verbatim (as in «Fly’s Fate»), other times a slower version of the ascending, minimalist motif, or orchestrated differently (the organ variation in «That Night», or the Michael Nyman-like variation in «Rosalie»). Other times yet again it’s just the minor-mode chord modulations without the minimalist figure, like «Memories» or «Horizon». It’s an organic score that uses a dynamic, mono-thematic approach to mirror Naofel’s emotional life; both his sorrow and love.

Additionally, there are a few songs that I assume are written by Levy; more or less in the same style as the score, even if the genre varies (from the Daft Punk-like «You’re the One» to the hip hop of «Camtar» and «Sale Soirée», the latter with a delicious harpschicord backdrop). Eventually, the score, like the movie, reaches its much-needed catharsis in «End Credits Alternative» – one of three bonus tracks on the album, an upbeat, major-mode affair with high-pitched synth string outbursts.

There are some drawbacks; I could be without the dialogue in «Igloo», for example (dialogue on soundtracks is a no-no), and there are times when the mono-thematic approach becomes somewhat static, but overall, it’s a score that perfectly mirrors Naofel’s qualms. Somewhat detached, but hovering over the story like a gust from the past, or an aural spirit, call it what you will. If I had heard this in time, it would no doubt have featured on my top 10 list of 2019. 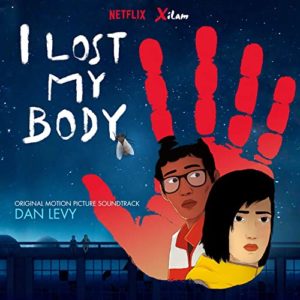