John Williams and the Berlin Philharmonic Orchestra – two of the greatest musical entities of the last century – finally met for a 3-day concert series in October, in many ways another testament to Williams’ newfound respect among the global classical elite.

When conductor Herbert von Karajan began his legendary recording series with the Berlin Philharmonic and Deutsche Grammophon in the late 50s, a young John Williams was starting his own Hollywood career across the pond. Little did he know then that he would make his debut as conductor of that same revered orchestra more than 60 years later.

Little could we – as European fans – imagine just some 15 years ago or so that the composer would visit our continent again, for a “concert tour” of our most esteemed orchestras. First out was the London Symphony Orchestra in 2018, which he sadly had to cancel in the last minute due to illness (although the concert went ahead with Dirk Brossé as conductor). Then came the Vienna Philharmonic in January 2020 (shortly before the covid outbreak), which he fortunately did attend. Now we cannot only add the Berlin Philharmonic to the list, but – if all goes well – a confirmed concert with Filharmonica della Scala in Milan, Italy in June 2022.

And who knows what else? Williams astonishingly turns 90 in February, but seems both fit and determined enough to complete his bucket list performances at the tailend of his life – despite the challenges of long-distance travel that a soon-to-be nonagenarian might endure.

To be fair – I wasn’t sure if Williams would actually appear, even though I had seen pictures of his rehearsals with the orchestra. The disappointment of his London cancellation in 2018 was still embedded in my body (I had prior engagements that prevented me from attending the Vienna concert).

This combination of excitement and worry runs through my body as I approach the sleek architectural lines of the Philharmonie for the first of three concerts on Thursday, October 14th. There is a steady stream of audience members checking in, but not like the online frenzy I had experienced when I booked a ticket in August; more a tentative buzz inside the foyer, emanating from legions of mask-covered faces.

For this concert, I had purposefully booked a seat in the choir section behind the orchestra, which I knew would not be ideal in terms of sonic reproduction, but I could stare the composer in the face for the duration. As I have seen Williams live twice before (at the Hollywood Bowl in 2012, and Boston in 2014), this would be more about enjoying the experience from – literally – a different angle. More about seeing the man in action, less about the actual musical content. 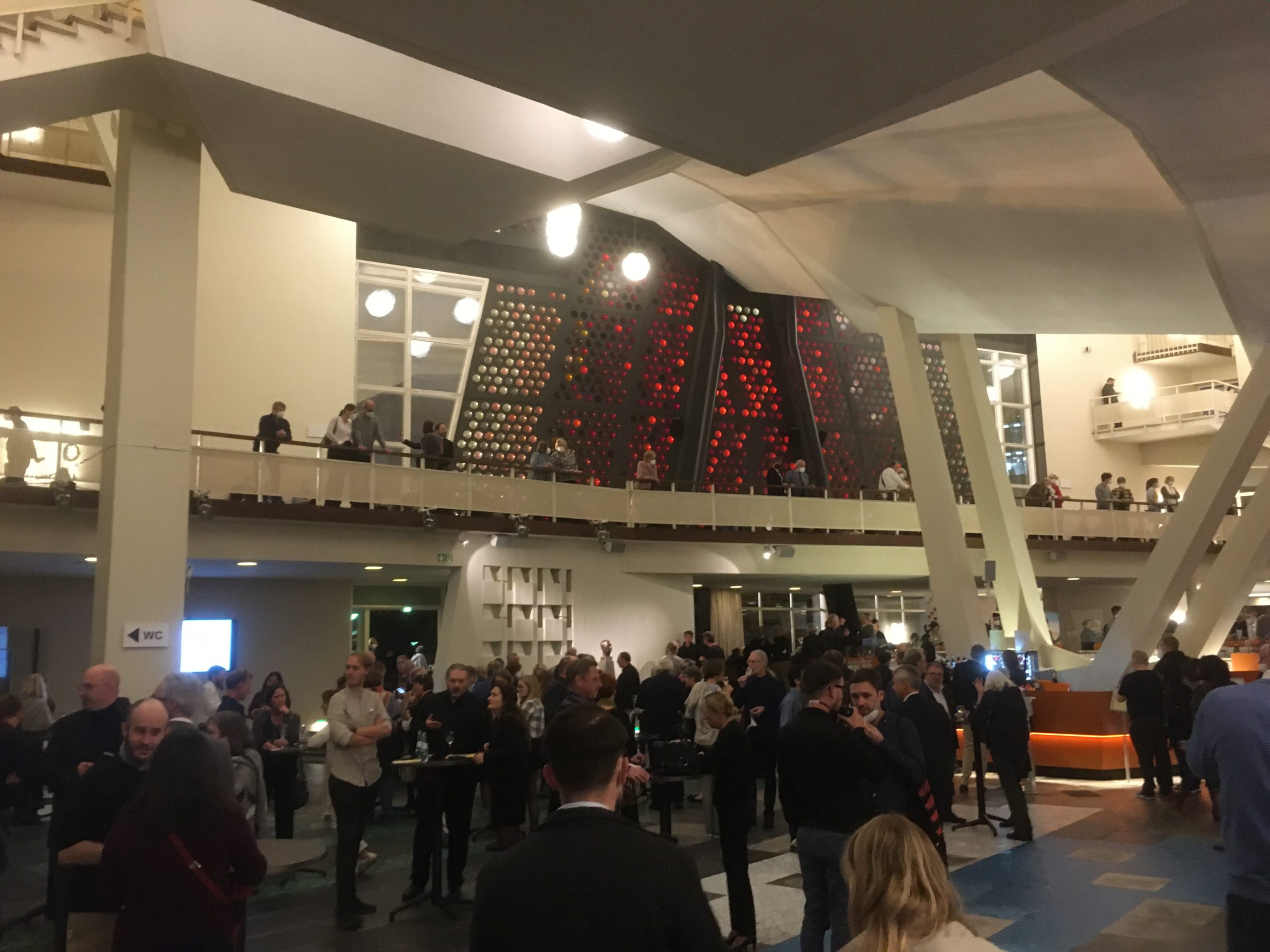 But my worry quickly dissapates as I see Williams pass by in the corridor by the orchestra entrance and shortly thereafter enter the stage to thunderous applause from a packed auditorium (well, 90% packed, at least – there were still some empty seats scattered about). Without adressing the audience, he climbs the podium and quickly launches into the «Olympic Fanfare and Theme» that he wrote for the 1984 Olympics in Los Angeles – a proper overture that has become somewhat of a concert stalwart over the years. It’s a fitting piece that encapsulates the jubilant orchestral style that once emanated from this very part of the world.

Still without any words to the audience, he goes straight into Close Encounters of the Third Kind (1977) – the concert suite that showcases both the explorative, dissonant first part and the impressionistic, Debussy-ian second part. Glancing over to the older couple sitting next to me – undoubtedly subscription holders that have a prejudiced view of Williams’ “sound” – it’s always fascinating to see their reaction when this decidedly different side of him makes an appearance.

Then he finally adresses the audience, in what is one of the longest concert monologues I’ve seen him do. First speaking about Berlin; his wonderment in watching the buzz of the city from his car window, with families and cyclists roaming about (no doubt a more unusual sight in LA), and then a few words about his score to Ron Howard’s emigrant movie Far & Away (1992) starring Nicole Kidman and Tom Cruise (sporting what is largely considered one of the worst Irish film accents of all time) – especially his thrill in writing in the folk idiom, working with The Chieftains (he mentioned Paddy Maloney by name, even though he neglected to mention his recent passing) and doing upbeat brawl music.

The following suite from Far & Away – not performed that often in concerts – is surely one of the evening’s highlights. Not only in its life-affirming, pastoral sweep, but the sheer giddiness of watching the revered Berlin Philharmonic “jigue” it up; a reminder that a new generation of musicians now makes up the orchestra, musicians who have grown up with Williams’ music and have less of a snobbish attitude to film music in general.

Introducing the selections from the Harry Potter series («Hedwig’s Theme», «Nimbus 2000» and «Harry’s Wondrous World») with the remark that it’s the “biggest British export since The Beatles”, he now also captures the excitement of younger fans who first discovered him through the boy wizard.

The first half ends with the theme from Jurassic Park (1993) – always a major highlight for me, as it remains my alltime favourite score (although – to be fair – I don’t quite understand how he labels it “the last few minutes of the movie” in his introduction). While the theme – especially the opening brass statement of its regal first part – often causes flubs among nervous musicians, there are few to spot here. It’s seamless.

After the intermission, Williams kicks off with another fanfare – the theme from Superman: The Movie (1978). Interestingly, this is the first time I notice some minor performance issues. The string ostinato leading up to the theme is a bit slow, so Williams “pulls” up the tempo with firm arm movements, causing a noticeable speed increase midway. This was more interesting than annoying, i.e. seeing the organic connection between conductor and orchestra as it unfolds in real time (kudos again to my choir seating for allowing me to see this!).

Next is a considerable selection from the Indiana Jones movies, introduced tantalizingly by Williams with his confirmation that he’s beginning work on the fifth movie in a “few days” (although the film has since been postponed to 2023). Also interestingly, he introduces «Scherzo for Motorcycle and Orchestra» from Indiana Jones and the Last Crusade (1989) by using the term ‘bad guys’ rather than ‘nazis’ to describe the pursuers in the scene – no doubt more diplomatic, given the venue.

While it’s certainly nice to hear the new, autonomous arrangement of «Marion’s Theme» from Raiders of the Lost Ark (1980), it does perhaps become a bit overkill when «Raider’s March» is played next – as «Marion’s Theme» also features prominently there, as its B theme.

These concerts have received some warranted criticism for relying too heavily on the big and boisterous; i.e. the long string of flashy fanfares and percussive punctuation. But that also means the slower and more lyrical parts are put into wonderful relief, such as the gorgeous concert piece Elegy (originally Elegy for Cello and Piano in 1997, then transcribed to Elegy for Cello and Orchestra a few years later), which is next on the programme – with cello solo by Bruno Delepelaire. Written as a memorial piece for a family tragedy, and based on a secondary theme from his Seven Years in Tibet (1997) score, it’s a somber, aching performance that encapsulates feelings of grief and reflection. A necessary respite in the programme.

It’s now time for the Star Wars fans to get their due. To my big surprise, he kicks off this segment with his Han Solo theme («The Adventures of Han») from the vastly underrated space western Solo: A Star Wars Story (2018), otherwise scored by John Powell. It’s a theme and score I’ve listened to maybe 2-3 times since its release, so it was almost like a premiere (and certainly a concert premiere for me). More whimsical in nature, jumping lightly across both instrument groups and the scale, it perfectly exemplifies Williams’ post-2005 work. Although I do have some issues with this particular direction in his recent music, I do marvel at the “busy-ness” of the piece, and the apparent ease with which the ageing composer creates and performs it.

From there, it obligatory moves into classic Star Wars music – a soulful rendition of «Yoda’s Theme» followed by the «Throne Room» concert arrangement, an arrangement that somewhat bizzarrely “restarts” the Elgar-ian first part and plays it once more before the main title drops in.

Standing ovations and applause get Williams back on stage three times  – first for a performance of «Princess Leia’s Theme» (which he apparently only did this premiere night, but then dropped for the remaining two), «Flying» from E.T. and – again obligatory – ending the concert with «The Imperial March», before he puts his head to his hands, signalling that he’s tired. While I was not present for the Saturday performance, the most popular of the three, there was apparently applause for 13 minutes with neither the orchestra nor Williams returning to stage. Which is understandable, given the amount of energy that must have gone into these three nights, for a man that age (fit or not).

Most everything has been said about these pieces already, about Williams and about the skill of the Berlin Philharmonic. For me, this wasn’t so much about the music in itself or the performance qualities. It was more like a ritual – a rare opportunity to see the man himself, to share with him this particular moment in time and space.

When you’ve obsessed over someone’s music for so many decades, it becomes part of your musical DNA; your whole cultural identity. But always with the creator in absentia. So to get that identity manifested in real life, with the creator present, is a peculiar psychological phenomenon. It’s happened during the previous Williams concerts I’ve attended (especially the 2014 Boston concert, which no doubt remains my favourite due to my proximity to the stage), it happened now and it will no doubt happen again – if we’re lucky to get more European concerts.

Very sad news this evening. Schulze's score for the Norwegian film HAVLANDET was particularly beautiful, but his catalogue of both film scores and studio albums is rich. https://variety.com/2022/music/news/klaus-schulze-dead-german-electronic-music-pioneer-1235242538/