French director Sébastien Marnier made his impressive feature film debut with Irréprochable (2016), a taut, elegant thriller about an unemployed 40-year-old woman who stalks a younger woman that “steals” her job. In 2018, he followed with L’Heure de la Sortie, about a substitute teacher who eventually realizes that the elite class he’s tutoring harbours a dark, cult-ish secret.

Both films are slowburning, social realist thrillers that particularly find their groove from the second act onwards – always with a sense of unspoken mystery, peeling off layers upon layers in the characters’ psyches and motivations.  Marnier has certainly seen his Haneke.

French electropop trio Zombie Zombie, consisting of Etienne Jaumet, Cosmic Neman and Dr Schonberg, has been active since the mid 2000s. Before landing their first score assignment with Louiba Hamra (2013), they were known for their old school, analogue electronica, channeling their hero John Carpenter in the tribute album Zombie Zombie Plays John Carpenter (2010), for example. After two collaborations with Marnier, a fruitful, long-lasting relationship seems to have formed. While Irréprochable has been released digitally before, Music Box Records released both scores on the same CD in March-2019.

The score for L’Heure de la Sortie is situated within a Carpenter-esque universe – appropriate since the premise of the darkminded pupils has a definite Village of the Damned (1995) feel to it.  Much like Disasterpeace’s score for It Follows (2015), it employs zithering textures in the higher register counterpointed by the occasional dark beat. A good example is the opening track «Etrange balade en forêt (Filature)», a sequence in which the teacher stalks his students through a forest. One of the album’s highlights, for sure, alongside the energetic «La boîte de nuit de Tonton».

Another highlight is «Thème de Pierre» for Laurent Lafitte’s teacher character, which occurs twice on the album in slightly different variations – comforting, repetitive chord modulations offering a warm, but slightly downbeat outlook on his eventual descent into suspicion and paranoia. The oddest track is perhaps the song «Free Money» in which the student choir sings about their outrage at the world we live in, performed homogenously and slightly off-key, with a somber, Jóhann Jóhannsson-like drone underneath.

Irréprochable – the superior film of the two – is stylistically in the same territory. The troubled stalker Constance is mirrored perfectly in an icy, electronic soundscape – her monomaniacal obsessions cemented in both regular beats and sliding, twisted harmonies. Like «Running (Theme de Constance)» or «Folie Forieuse, pt. 1» and «Folie Forieuse, pt. 2». The most entertaining cue might be «Boite de nuit» – a funky source cue for the obligatory disco scene – but the greatest appeal of the score is how Zombie Zombie constantly undermines the sense of harmony by adding longlined minor-mode chords under lofty major-mode melodies.

We’re fortunate to live in an age where retro synthwave scores are quite commonplace, but it’s not easy to navigate between the good and the bad. Much like their French colleagues Daft Punk, however, Zombie Zombie is very adept at channeling both 80s and 90s influences, ambient, psychedelia and EDM while keeping their original voice, perfectly suited for the type of socialrealist otherworldliness that directors like Marnier brings to the table. May it long continue! 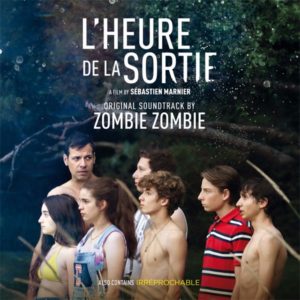