Mission: Impossible – Fallout (2018) is the sixth installment of the Mission: Impossible film franchise. It continues the story of the previous film, Rogue Nation, which received quite good reviews. Christopher McQuarrie still directs, but because he wanted to change the tone of the film as if it were by another director, many of the key crew members were replaced. That included composer Joe Kraemer, who had provided one of the best orchestral scores of the 2010s. He was replaced by another relatively unknown composer, Lorne Balfe.

While the film generally received rave reviews, its score did not do that well with critics and listeners. Even on Hans Zimmer’s fan site, Balfe’s own turf, the user rating is a meager 2 out of 5.

I’d like to point out that this is a review of the album release, by La-La Land Records. I’m of the conviction that when a film score is released on album, either in edited or unedited form, it should bear to be put under scrutiny as a pure musical experience.

I wasn’t very familiar with Balfe’s output prior to this score, but I was at least hoping he’d do something interesting with the significant Mission: Impossible musical heritage. The album starts off somewhat interestingly with the percussion-heavy «A Storm is Coming», culminating in a simple four-note motif in low brass that’s clearly lifted from Hans Zimmer’s score to Inception (2010). This leads directly to «Your Mission», which presents a slowed-down version of the first three notes of the MI theme, again in low brass. «Fallout» is Balfe’s take on the classic MI theme. With frenetic bongos fading in and out, it soon gets annoyingly repetitive. That’s actually a good description of the whole album, permeated by bongos and the two mentioned motifs which are too simple to carry the score.

There aren’t really any highlights worth mentioning during the album’s substantial running time, but certainly a lot of bad moments – the music mostly sounds like an early draft by an undergrad that barely got accepted to music studies and then skipped most of the classes. The album is rounded off with «Mission: Accomplished»; Balfe’s take on the MI theme now featuring a cheesy, “epic” choir shouting the bass ostinato of the theme, making it even more annoying.

There are large sections of droning material that either implies laziness or a lack of time. It’s understandable that time constraints can lead to quick solutions for longer stretches, that are effective enough in the film, but there’s no need to keep all those mind-numbing repetitions on the album. That made it a real chore listening to the whole thing, not to mention listening to it again. In interviews, the composer has been boasting about the enormous brass section that he employed for the score, but that doesn’t help much when many of the tracks seem processed to the point of sounding synthetic, dramatically reducing the punch of the orchestra.

I haven’t been very impressed by the scores to some of the other entries in the Mission: Impossible franchise, but compared to this, they seem like near-masterpieces. One can argue that the score has done its job if it works in the film, but after Kraemer’s catchy and intelligent score to the predecessor, which also held up magnificently on its own, Balfe’s work on Fallout emerges as such a lost opportunity. McQuarrie’s mission, should he choose to accept it, is to find a more suitable composer for the upcoming Mission: Impossible 7 and 8. 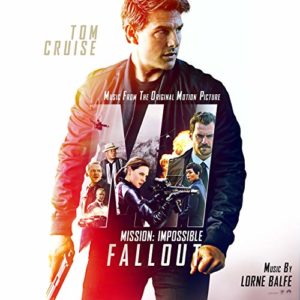