With the sixth installment in the Mission Impossible franchise about to hit theatres, we look back at the surprise score to the previous entry, composed by Joe Kraemer. It only took five tries to get a great score to an M:I movie.

Kraemer came to wide attention with his scores to two Tom Cruise flicks; Jack Reacher (2012) and Mission: Impossible – Rogue Nation (2015). Before that, he received recognition for his score to The Way of the Gun (2000). This triptych was incidentally the first films directed by Christopher McQuarrie, and a solid director/composer relation seemed to be under way.

McQuarrie started out as a writer, and in that capacity he’s probably best known for The Usual Suspects (1995). Rogue Nation was McQuarrie’s first take on the M:I franchise, and he filled the roles of both writer and director. The film features an absorbing plot, impressive set pieces, jaw-dropping action sequences, cunning plot twists, and a great female counterpart in Rebecca Ferguson’s mysterious Ilsa Faust to Tom Cruise’s agent Ethan Hunt.

Kraemer pays respect to Lalo Schifrin’s musical style from the original 60’s TV series while giving it an appropriately updated sound. As an homage, the recording is fully acoustic, and it oozes of quality – from the expert performance to the transparent soundscape. The composer manages to conjure up fresh arrangements of the classic quintiple-metred main theme – in my opinion better than what’s previously been done for the franchise by other composers. He makes regular use of Schifrin’s auxiliary themes and motifs and creates his own solid theme for the villain. The end result is a score that is suspenseful, inventive, and not least very catchy. The score was released on album by La-La Land Records in a digital release running 68 generous minutes, and on compact disc with two extra tracks adding five minutes. The exciting cat-and-mouse action segment that takes place at the Vienna State Opera, represented on the soundtrack album by «Havana to Vienna» and «A Flight at the Opera», is one large musical highlight. Other high points include «The A400»; in which the M:I theme is presented in all its glory and gets a tour-de-force outing accompanying the film’s “James Bond opening”, Kraemer’s new villain theme presented in «Solomon Lane», the seven minutes of suspense in «The Torus», the percussion-heavy chase cue «Morocco Pursuit», and «Finale and Curtain Call». In fact, there are so many highlights that your mission, should you choose to accept it, is to listen to the album from beginning to end. If there’s anything to criticize, it could be that the music loses some momentum in the final third of the album’s duration.

«Finale and Curtain Call» opens with a delicate take on Nessun Dorma from the opera that acts as a backdrop – Puccini’s magnificent Turandot. Kraemer elegantly incorporates further quotations of the aria throughout the score, sadly not included on the album. It’s tempting to say that the opera reflects the unfulfilled love of Ethan Hunt, but it might have been chosen mainly for its dramatic character, or simply because it’s awesome!

Alas, Kraemer was not invited back to score McQuarrie’s follow-up, aptly titled Fallout, which is especially unfortunate since it’s a continuation of the story in Rogue Nation. Kraemer has made it clear he wanted to return, and his exclusion is really quite strange considering the score was among the finest of 2015. Rumor has it that the director didn’t want much music at all in Rogue Nation, but was overruled by producer Tom Cruise. For Fallout, McQuarrie is credited as one of the producers and I guess that gave him the sufficient clout to get his way with the music. It will be interesting to see how this works out in the upcoming film. One thing’s clear though – for Kraemer’s effort in Rogue Nation we can only say: MISSION ACCOMPLISHED! 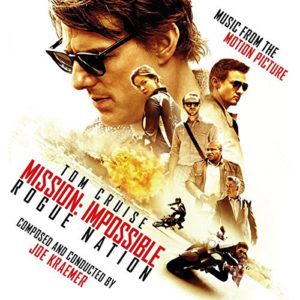