The live action version of Disney’s animation classic Mulan (1998) finally received wide distribution on Disney+ on September 4, 2020, after having been corona-postponed since its theatrical premiere in March, and numerous other development issues. The film is directed by Niki Caro, and features Yifei Lu in the title role, but it also marks the return of 90s star Jason Scott Lee as the antagonist warrior Bori Khan.

I am ideologically opposed to Disney’s whole ‘Live Action Re-animation Project’ (pun intended), wherein classic animated movies are watered out with new live action adaptations. The 2020 version of Mulan is yet another example why: Cleanshaven and texturally void, with stereotypical roles gesturing and speaking in an exaggerated, animated fashion that does not translate well to a live action format. For all its contemporary topicality about female empowerment, it’s constantly undermined by a flat, digital and kitchy staging.

The score is composed by Harry Gregson-Williams (b. 1961), a veteran who grew out of Zimmer’s camp in the 90s, but has since become one of Hollywood’s major players with hits such as Chicken Run (2000), The Martian (2015), the The Chronicles of Narnia movies, and his masterpiece Kingdom of Heaven (2005). Having extensive experience with both animation and Disney productions, he seemed to be a natural choice for this project.

It might be unfair to compare this to Jerry Goldsmith’s iconic 1998 score, but it’s an inevitable comparison. Goldsmith infused the original Mulan with broad themes, setpieces driven by his trademark odd meters and a lush, organic mix of western and eastern elements. Plus referencing the snappy song melodies by Matthew Wilder and David Zippel when necessary.

Harry Gregson-Williams’ effort, on the other hand, has few traces of this. I think it’s very telling that the highlights of the album are the fragmented references to the original Wilder/Zippel melodies «Reflection» and «Honor to Us All» in tracks such as «Four Ounces Can Move a Thousand Pounds» and «Fight for the Kingdom». The only new theme of note appears to be a vague, 5-note oriental motif that can be heard most prominently in the first track «Ancestors» , but – as with most of the score – it’s a rather static affair.

Some critics have claimed this is an “Asian variation” of the gorgeous Kingdom of Heaven, but the two are miles apart in terms of quality and consistency, so the comparison makes no sense. While Mulan is certainly a meeting point between western tropes and Chinese instrumentation like the original movie, it comes off more as indistinct colourization – a little bit of erhu here, some bamboo clappers there. Similarly, the action material is trite – based on the same type of ostinato-driven anonymity you’ll find in any contemporary genre film. The best parts of the album are actually the more spiritual and down-tempo cues, like «The Lesson of the Phoenix».

Adding to this problem is the sheer length of the album. At 85 minutes, it’s at least 40 minutes too long – making the shortcomings more evident when padded out to the extreme. It’s a sad symptom of our times when composers pile on their soundtrack albums because they can, while never stopping to ask if they should. This would unquestionably have scored higher, had it been more carefully and succinctly presented.

In short, Harry Gregson-Williams’ Mulan is a disappointment – at least compared to his usual high standard. Even if the film is a mess, the sheer canvas is big enough to inspire a more involved and tactile score than what we ultimately got. But kudos to Christina Aguilera for reprising her pop version of «Reflection» over the end credits – the very song that jumpstarted her career in the 1998 movie. 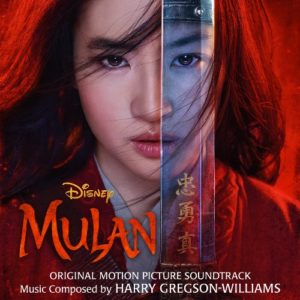