Occhiali Neri aka Dark Glasses (2022) is the latest film from 81-year-old, Italian master director Dario Argento, his first in a decade. True to form, it’s a proper giallo that recounts the story of an escort that is attacked and blinded by a serial killer – and stars the director’s daughter Asia, now clearly reconciled with her father after some troublesome years.

The film premiered at the Berlinale on February 11, 2022, but has yet to find a Norwegian distributor, so this is one of those ‘sight unseen’ reviews that will have to do until it’s made available over here. However, it immediately became a point of interest in April 2020 when it was reported that legendary French electronica gurus Daft Punk had been approached to write the score. Or rather, that they had approached Argento, being massive fans. As it later turned out, it was not a professional approach, just comments pertaining to their mutual respect. And then, of course, Daft Punk disbanded altogether in 2021, so a potential second score after their amazing Tron: Legacy (2010) is now a moot point.

Instead, French synth artist Arnaud Rebotini (b. 1970) got the gig – in film terms perhaps most famous for his score to the 2017 AIDS activism film 120 battements par minute, which – at least partially – provided propulsive energy to the otherwise rather stale mise-en-scène. Rebotini also spearheads the electroclash band Black Strobe.

Rebotini enters a roster of extremely impressive Argento composers – from Goblin to Ennio Morricone to Pino Donaggio to Keith Emerson. In a statement on the sales page for the vinyl release of Occhiali Neri, Rebotini says: “I immediately thought of the music of Goblin and Claudio Simonetti /…/ I obviously had the bells of Suspiria in mind, the introduction sequence of Profondo Rosso, its gothic organ, or of course the electronic sounds of Tenebre. /…/ Like Goblin did with funk and disco, I added a more personal touch with more contemporary sounds from electro and techno.”

In a way, that’s a succinct description of the soundtrack album. The chiming bells of the opening track «Occhiali Neri», in combination with the repetitive organ figure immediately send associations to the Italian prog band and is repeated throughout the album in various arrangements.  Often, however, Rebotini infuses the zithering landscapes with EDM- or darkwave-like elements, as in the highlight track «Serpenti e Cacciatori». The result of this amalgam are conceptually similar to John Carpenter’s Lost Themes albums – the meeting point of dark analogue minimalism and fatter, contemporary beats.

Beyond this approach, there are elements of deeper experimentation, like the aggressive 6-minute track «Inseguimento Notturno», which sounds like a cross between darkpsy and Brad Fiedel’s Terminator. Or more downkey and ambient, like the wobbly percussion sounds in «Diana Da Sola Nel Bosco» or «La Solitudine di Daina».

One can only speculate what a Daft Punk score would have sounded like, but it wouldn’t necessarily have been that different from Rebotini’s work – both in approach and sound. Echoes of old analogue synths, with pinched acidic sounds and manic sequencers  – often rumbling eerily in the lower registers. While it may be bereft of many “wow” moments, it’s a conceptually sound score that no doubt mirrors Argento’s playful genre tropes. 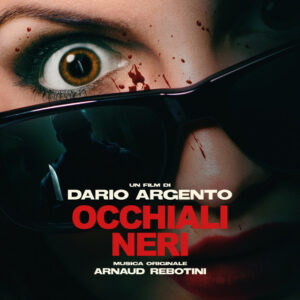