Our Planet (2019) is yet another lavish, David Attenborough-narrated nature documentary series, this time produced for Netflix (their first of the kind) rather than BBC. Shot in 50 different countries over four years, it concerns fragile habitas and reservations across the world, and the efforts made by conservationists to preserve the animal and plant life against industrial and enviromental threats.

Composer Steven Price (b. 1977) worked in numerous capacities for composers such as Trevor Jones and Howard Shore before getting his big solo break with the British cult classic Attack the Block (2011). He quickly became a hot name after Alfonso Cuarón’s superb Gravity (2013), combining oscilating ostinati with large, echoey ‘space chords’. Since then, he’s landed major assignments like Fury (2014), Suicide Squad (2016) and Baby Driver (2017).

Something has happened to nature documentary scoring in recent years. Just a few years ago, we could either revel in beautiful, orchestral impressionism (like George Fenton’s BBC documentaries) or magical, primarily electronic soundscapes (like Eric Serra’s Atlantis). But these days, it seems to be more neither/nor; scores that on the surface might sound impressive, but that are really just ostinati complemented by ‘big chords’, often with a pinched dynamic range. Alas, Steven Price’s Our Planet is another example of that.

Most of the tracks on this album are propelled by a steadfast, rhytmical pulse, augmented by a flurry of minor-major chord leaps, a slow buildup and perhaps some choral colours to make it sound big and ‘epic’ – like «Great Rolling Waves», «Where Life Gathers» or «The Ocean Belong to Us All». Fans seem to flock to this sound like moths to a light, but in my opinion it sounds more like trailer music, devoid of dynamic range and detailed flourishments. Just listen to the string section; mostly in the higher register, but sounding pinched and homogenous – like wallpaper. When all is said and done, it’s really the “Emperor’s New Clothes”.

The album works best when everything is stripped down to the bare basics, in the calmer tracks that allow the musical elements and the melodies time and space to breathe, like «The Importance of This River», «Baby Blue», «Corals» and «Every Other Breath You Take»; or in the song «In This Together» which is more suited to this kind of hybrid sound. Unfortunately, these highlights are buried in a 2CD album that wears and tears your patience over the course of 146 minutes (I’ve been told there is a release that even expands the material further).

I’m a fan of Steven Price (Gravity was one of the best scores of 2013), but this is not his shining hour. A few tracks show the promise of what this could and should have been, but as a whole, the project is swallowed by rather indistinct, bombastic trend sounds; a sentiment that will no doubt prove controversial for the score’s many fans. 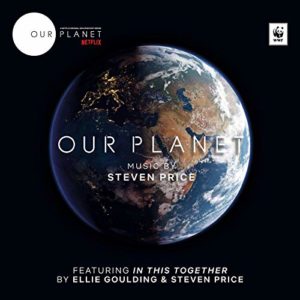