Raya and the Last Dragon (2021) is the latest tentpole animation from Disney, directed by Carlos López Estrada and Don Hall. Originally intended for theatrical release, it will now premiere exclusively on Disney+ (for premium users) on March 5. In a premise that resembles The Dark Crystal (1982), it’s a fantasy epic about a a young woman who must find and assemble a magical dragon gem to unite her world, and protect it from the threat of the Druun monsters that turn everyone into stone.

The film is a cute affair with a wide, humanist message about unification. It is not accidental, I think, that the world is named Kumandra – a short step away from the African spiritual Kumbayah. While the film’s efforts to be as diverse as possible, and to draw on relatively transparent, naïve rhetorics can come off as a bit insistant, it it is very much a product of its time – perhaps a necessary optimism pill in a time where politics and a raging pandemic divide people. While the pace is a little scatterbrained and rushed to reach the focussed and emotional heights of, say, Moana (who can compete with the genius of Musker & Clements, anyway?), it nonetheless presents a series of engrossing landscapes and characters – including the My Little Pony-like dragons.

The score is by veteran composer James Newton Howard, no stranger to animated films with hits such as Gnomeo & Juliet (2011), Treasure Planet (2002), Dinosaur (2000) or Atlantis: The Lost Empire (2001) on his extensive resume. Listen to our 2013 interview with Howard here.

On paper, the combination of fantasy, animation and ethnic elements seemed like the ideal canvas for Howard, whose track record in these genres is stunningly impressive. However, the film’s fast pace and sudden tone shifts leave less room for the developped musical setpieces of his previous animated films. There is no «The Egg Travels» from Dinosaur or «The Crystal Chamber» from Atlantis to be found here, even if he taps into the stylings of those scores on occasion. This is a far more mickey-mousey affair.

The score (and soundtrack album) mixes a whole lot of ideas – from spy funk to techno to orchestral action to ethereal world music, but they’re usually just seeds that aren’t allowed time and space to grow. Even within single tracks, like «Prologue», it runs through a series of brief style excursions that are over before they begin. It doesn’t help that the album is excessive at 70 minutes, so you’ll have to go searching for the best bits and presumably create a more coherent playlist on your own.

Fans of the traditionally sweeping Howard will find some satisfaction in tracks like «Running on Rain Drops», «The Druun Close In» or «Return» that bear some resemblance to the poetic sounds of Atlantis, but they’ll have to wade through quite a bit of non-descript action and suspense music to get there. The best bits are rather the ones that strip things down to the basics; a more synth-based, ethereal, ethnic environment (sometimes even with worldbeats) that demonstrates why Howard would be the ideal composer to fill the late James Horner’s shoes on the new Avatar films – tracks like «Search for the Last Dragon», «Enter the Dragon», «Captain Boun», «Sisu Swims» or «Journey to Talon».

It’s difficult to fault James Newton Howard for a film that rarely settles into a groove. The music will inevitably reflect that. But I would have loved to hear him develop some of these ideas into a more coherent soundscape; the brief musical ideas are certainly strong enough for that. Hopefully, we’ll get a more concise, ethnically tinged fantasy score in his upcoming Jungle Cruise. 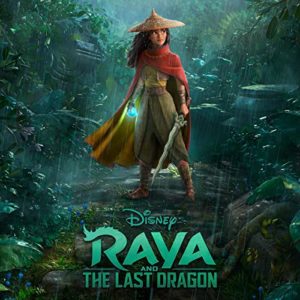