The family drama Rocket Gibraltar (1988) sported late career efforts by director Daniel Petrie and actor Burt Lancaster, but also showcased Macaulay Culkin in his debut film role, pre-Home Alone. The premise is simple: Patriarch Levi (Lancaster) gathers the whole family for his birthday, but age-old grudges and personal conflicts soon arise. The film was neither a critical nor a commercial hit at the time, but has slowly been rediscovered as an involving 80s chamber piece in the style of The Big Chill (1983).

Composer Andrew Powell (b. 1949) is perhaps most famous for his long association with art rock band The Alan Parsons Project as their arranger and orchestrator, but he’s also had a distinguished career as a concert and theatre composer. He does not have a lot of film credits, but Richard Donner’s fantasy epic Ladyhawke (1985) remains a highlight (and one of this author’s personal alltime favourites) – especially the mix of traditional orchestral writing and more pop-infused elements. Surprisingly, Powell made a comeback on the film score scene in 2017 with the short film score Here We Go Again, Rubinrot.

Rocket Gibraltar is for the most part a lyrical, orchestral score in the vein of Georges Delerue – the master of ‘bittersweet’ – painting the family interactions in gorgeous, pastoral strokes. But it is a contemporary story, filled with conflicts and tension, and needs to adher to these aspects as well.

One can roughly separate the score into three main ingredients. First is the “deleruean” elegance, with playful flute runs and noble brass melodies – on display in tracks like «Discovering Rocket Gibraltar»  or «Levi Describes a Viking Funeral». These are unquestionably the highlights of the score. Second is the contemporary pop beat elements that were also used predominantly in the action and transportation sequences in Ladyhawke or Powell’s work with The Alan Parsons Project, like «The Morning After/Blue & Co. Go to Rocket Gibraltar», «Levi and Blue’s Lunch» or «Crow’s Voodoo Curveball is Back». Charming, no doubt, and less self-aware than in a period epic like Ladyhawke. Third are the dissonant suspense/tension tracks like «Taking Levi to Rocket Gibraltar» with jagged string, brass and flute flurries.

The score seems to be presented complete and chronological, which is rarely a good thing, but at roughly 40 minutes – and given the defined triple-nature of the score – it presents less of a problem than it usually does. It all builds and flows together quite well. There are also 14 minutes worth of added bonus tracks, containing various alternate takes on preceding tracks. Nice for curiousity’s sake, but can easily be programmed out for a more succinct listening experience.

Rocket Gibraltar is a small gem of a score that deserves to finally have its premiere release on Intrada Records, even if it came 30 years late. Heartwarming, intimate, versatile and bittersweet with the same melodic and orchestrational finesse Powell displayed in Ladyhawke. That the composer’s filmography is now fully represented on album is an extra bonus, of course. This is a must-have for all Alan Parsons Project fans out there (of which I am one), and generally fans of thematic writing.

Rocket Gibraltar is currently not available in streaming format, but can be purchased at Intrada’s store. 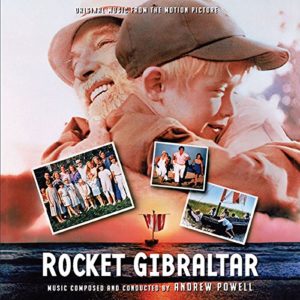 Jon Aanensen delves into yet another filmography, this time the legendary synth wiz Harold Faltermeyer, as a warm-up to next year's TOP GUN: MAVERICK. http://celluloidtunes.no/harold-faltermeyer-a-filmography/