On the film’s 20th anniversary, La-La-Land Records re-releases John Williams’ score to Steven Spielberg’s acclaimed World War II drama Saving Private Ryan, in a slightly expanded edition. While nothing substantial is added, the release is a welcome opportunity to re-appreciate how Williams wrote one of his most soothing scores for one of Spielberg’s most intense films.

For a Spielberg/Williams collaboration, the film has relatively little underscore, totaling a little under one hour for the movie’s almost 3-hour duration. The story depicts the disastrous allied landing at the site codenamed Omaha Beach in Normandy on D-Day in 1944 and the (fictitious) search for Private Ryan (Matt Damon) – the only survivor left of four soldier brothers – by the squad led by Capt. Miller (Tom Hanks).

The main program of the album is identical to the original 1998 release, and contains virtually all the music in the movie. As before, it is bookended by «Hymn to the Fallen» – a marvelous, stand-alone piece frequently performed in concerts, but which in the film is only heard during the end titles and is thematically unrelated to the rest of the score.

As usual, Williams edited some of the music for the album release, combining cues from different parts of the movie to improve the listening experience. The only music missing from the previous release were parts of «High School Teacher» and «The Last Battle», the film versions of which comprise the only added material for this 20th Anniversary release. The sound quality – which was fine to begin with – is also basically the same. Still, this score is definitely worth a revisit, and producer Mike Matessino’s essay on the film and score in the CD booklet is an engaging bonus.

Saving Private Ryan is as notable for the parts that are not underscored as the ones that are, and they explain the score’s relative brevity. The film set a new standard for realism in war scenes, and the battle sequences have a raw, documentary realism, achieved by an intense sound design and jagged, hand-held and almost intrusive camera work. The film’s fame comes mainly from these segments, especially the initial half hour depicting the Normandy landing, but also the lengthy final confrontation with German troops in a small French town. Spielberg’s close-ups of the realities and consequences of war – bodily and emotionally – on those in the middle of it turn these sequences into harrowing, almost unbearable experiences.

Any musical accompaniment to this audiovisual inferno would be almost meaningless, so Williams’ task is instead to supply some relief during the aftermath of these battles, as well as to underscore the relationships and camaraderie among the soldiers in Miller’s squad during their mission to find Ryan. 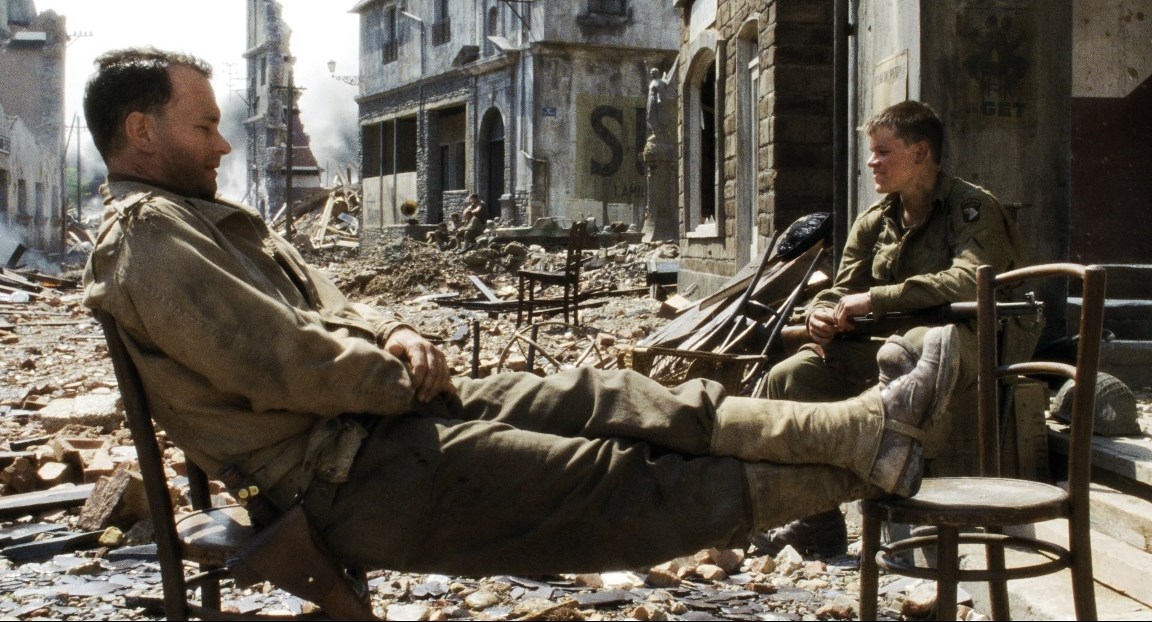 The dignified quality of «Hymn to the Fallen» sets the tone for the rest of the score. “Hymnal” is indeed an apt description of the soundtrack as a whole, with its emphasis on warm, full-sounding brass, woodwind and string harmonies and a tempo that is rarely above adagio or andante. All the tracks are relatively long and have a reflective, deliberate feel.

Keeping in line with the score’s understated nature, its themes also have a restrained, unobtrusive beauty – there’s nothing assertive here. «Omaha Beach» introduces the score’s most prominent theme –  a long-lined, achingly beautiful melody performed by low brass and strings, and in this track, which plays after the initial battle sequence, and also elsewhere, it functions like a requiem for the horrors we have just witnessed.

There are other stand-alone, subordinate themes and motifs, but Williams often lets the harmonies themselves carry the emotional impact, sometimes only as duets in woodwinds or brass – especially trumpets – and sometimes as resonant chords in separate instrument groups or combinations of them.

So, except for some soft snare and bass drum riffs, the score is totally un-militaristic. Track names like «Approaching the Enemy», «Defense Preparations» and «The Last Battle» would indicate some harsh and strident scoring, but apart from some suspense and unrest during «Defense Preparations», even these cues are characterized by the same low-key, but sonorous beauty that permeates the entire score.

Saving Private Ryan presumably marked the first and (so far) only time Williams used the Boston Symphony Orchestra for a film recording, after having collaborated with its musicians in concert settings and on non-soundtrack album recordings for many years, most notably as the principal conductor of the Boston Pops Orchestra (made up mostly of BSO members) from 1980 to 1993. The benefits of using an organized orchestra are on full display here. The playing of the session musicians in places like Los Angeles and London cannot be faulted, but with an established ensemble, you get the added unity, balance and precision of a group of musicians who play together daily. Especially the brass players of the BSO sound exceptional.

Much of the credit for the soundtrack’s warm, open sound goes to the fact that it was recorded at Boston Symphony Hall, whose spacious, church-like acoustics greatly enhance Williams’ full-bodied harmonies.

The open sound is further highlighted by the trumpet duets performed by Tim Morrison and Thomas Rolfs, who play opposite each other from two balconies in the hall. Their tone is crisp, but still warm, doing full justice to Williams’ elegaic melodies.

Some people find this score to be a bit too inactive and slow, but Williams’ vibrant orchestrations and beautiful, heartfelt themes have no trouble keeping this listener’s attention for the album’s full duration. It certainly defies one’s expectations of a war film score, and it’s all the better for it.

The 20th anniversary edition of Saving Private Ryan is not available on Spotify, but can be purchased here. 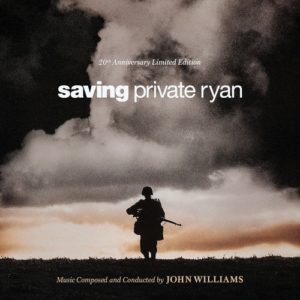