Brian de Palma‘s crime drama Scarface from 1983, based on a screenplay by Oliver Stone, starred Al Pacino as Cuban refugee/gangster Tony Montana, who came to Miami to experience the crime version of the American Dream. He eventually becomes a powerful and extremely homicidal drug lord. The film became quite a big success at the time, but it’s in more recent times that the cult status of the movie has been cemented.

De Palma went to Italian composer, songwriter and producer Giorgio Moroder (b. 1940) for the music. In 1983, Moroder was extremely hot both in Hollywood and in the pop and disco music world, having won an Oscar for Midnight Express some years earlier and having also scored films like American Gigolo, Cat People and Flashdance. Moroder and his studio assistant/arranger Sylvester Levay sculpted a fitting score for the film, and also churned out no less than 8 songs that would appear on the soundtrack album along with two selections from the instrumental score.

In 2018, La La Land Records began work on getting all the music from the film out to collectors, and now, 4 years later, the job is done. A double CD set with a 20-page booklet, with liner notes by Tim Grieving and a new interview with Sylvester Levay, limited to 5000 copies and running for 2 hours and 36 minutes, is finally out — almost 40 years after the release of the film. High quality as usual from La La Land, but I miss some photos of Moroder and the musicians in the booklet, working in the studio. Surely this must have been possible to track down? We have seen different pictures of the actors a thousand times, but this is a CD, not the film.

The first disc consists of the score, running for 77 minutes and 28 tracks. The three most important themes are those for Tony, Gina (Tony’s sister) and Elvira (Tony’s girlfriend). Those themes appear in different guises (maybe a little too often?) throughout the album, and they are of course also included on the original 1983 soundtrack. Tony’s theme is a destiny-filled melody that has a peculiar feel of classical music in the arrangement and chords. It’s mostly heard in the tracks «Just Paranoid» and «409 Citrus Drive». The tracks simply called «Elvira» and «Gina» showcase their themes splendidly, both of them being bittersweet and highly melodic pieces of electronic film music.

Personally, the piece of music that I most wanted was the «Main Title», a rhythmic and exciting theme that reminds me of French disco-electro artist Cerrone. This theme hits the zeitgeist of 1983 right in the bulls’ eye, and is a perfect opener both to the film and to the album. But other than these four themes, there really isn’t too much in terms of new and exciting material on disc one. There are interesting snippets here and there, though, like the Airwolf-like ending to «Tony Rescued», the haunting «Sosa/Talk To Frank», the Miami Vice feel of the attack parts of track 24 and the Harold Faltermeyer-like suspense of «Tony Escapes».

There is also «The Chase», which starts like Moroder has fallen asleep on his synthesizer, before it segues into a Sylvester Levay-like sequencer with Tony’s theme incorporated. Clever. «Bolivia» is a short acoustic folk music ditty, while tracks like «Bye Bernstein» and «Finale» are quite heavy-handed suspense cues that are not particularly easy on the ear. Disc 1 closes with the unused «Trailer Music», which plays like an instrumental version of the song «Push It To The Limit.»

The second disc contains the original 35-minute 1983 album, plus 43 minutes of additional music and source material. The original soundtrack included 10 tracks, all of them written by Moroder. Instrumentals «Tony’s Theme» and «Gina And Elvira’s Theme» have already been discussed, while the 8 songs are of course mostly in the disco genre. Paul Engemann’s «Push It To The Limit» is probably the most well-known song here; it’s classic Moroder, including the sitar-like sound that would permeate 1984’s «NeverEnding Story» by Limahl. Blondie’s Deborah Harry sings «Rush, Rush» three years after having worked with Moroder on «Call Me» from American Gigolo, and actress Maria Conchita sings the all-Spanish «Vamos A Bailar». Singers Beth Andersen and Elizabeth Daily are also featured; they would continue working at the Moroder camp on movies like Thief of Hearts, Electric Dreams, The Neverending Story, The Breakfast Club and Another Way. It must also be mentioned that Keith Forsey performs all the drums and percussion on this double album.

The 13 tracks of additional music are a diverse mix of extended versions, unused songs and source material. Beth Andersen’s «Right Combination» is better than a couple of songs on the original soundtrack, and that can also be said of Joe Esposito’s «Success», which reminds me of a theme from Cat People. An instrumental version of «Success» was used as the trailer music for Scarface. «Car Getaway Source» is an instrumental version of «Right Combination», while the three “Cuban” tracks are sleazy and simply annoying. The three “muzak” cues are somewhat more interesting, with Moroder’s style clearly coming through. And in the end, we have the two disco cues, where one of them bears a weird similarity to Harold Faltermeyer’s «Captain Freedom’s Workout» from The Running Man, no less.

156 minutes of music from Scarface is a real marathon, but this release shows just how right Giorgio Moroder was as composer for this film back in 1983. A cult classic has finally received the soundtrack release it deserves.

The new 2CD set is currently not available for streaming, but can be purchased at LaLaLand Records’ site. You can also hear our 2015 interview with Moroder here, including discussions on Scarface. 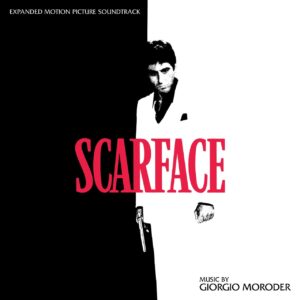