She Dies Tomorrow (2020) is the second feature film directed by Amy Seimetz, perhaps best known as an actress in films such as Pet Sematary (2019) and Alien: Covenant (2017). It’s a psychological thriller about anxiety – more specifically defeatism, as a sense of imminent death spreads like wildfire through a group of people that connect with each other. It premiered July 21st, 2020.

“Formally provocative and emotionally raw”, a viewer said about the film on Rottentomatoes, and that is an apt description. The tempo is slow, characters seem apathetic and Seimetz frequently inserts images of blood, fluids and faces bathed in neon lighting. All the characters, especially the protagonist Amy (Kate Lynn Shell), become alienated from their world, trying desperately to find some sort of connection (exemplified by Amy’s affectionate touching of inanimate objects in her surroundings) and eventually coming to terms with their death anxiety.

The music is by Mondo Boys, a composer duo consisting of Mike Griffith and Mike Schanzlin, who has specialized in film music over the last decade or so. Their style is eclectic, but frequently combines contemporary rock, pop and synth sensibilities with a more classical idiom. They previously collaborated with Seimetz on the TV series The Girlfriend Experience (2017-) and recently did the score to the Mel Gibson action thriller Fatman (2020).

She Dies Tomorrow is sparsely scored, which accounts for the soundtrack’s mere 19-minute running time (more of an EP than an album, really). The point is to let the images and characters speak for themselves; the absence of music adds to the prolonged sense of time in the film. Occasionally, Seimetz suddenly and abruptly cuts the music short – like Godard often did – to further stress the feeling of alienation.

However, at the center of both the film and soundtrack album is Wolfgang Amadeus Mozart’s «Lacrimosa» from his Requiem – a piece that has become somewhat of an evergreen over the years, often used in films. The narrative significance in this case is interesting: It appears both diegetically and non-diegetically throughout, occasionally in bits and pieces. Amy plays it repeatedly on her record player early in the film – as a source of emotional determination. The «Lacrimosa», of course, is part of the Dies Irae sequence in the Roman Catholic Requiem Mass, and deals specifically with the sorrow and comfort that lie in death. It’s almost too on-the-nose, but used with such reverence, it becomes enchanting.

On the soundtrack, excerpts of the «Lacrimosa» appear in track 2 and 9, while the rest of score utilizes the harmonic progressions (or perhaps even samples) of that self-same piece, often including voices, but now with added percussive effects or other contemporary elements. Similarly to Cats Eyes’ superb The Duke of Burgundy (2014), the result is a lush, dark and slowmoving amalgam of different musical traditions. It’s explorative and tentative in nature, highlighting the ‘invisible force’ that envelops the characters in anxiety – on display in tracks such as «Le Portail Oeuvre».

She Dies Tomorrow is a wonderful little score that inverts, plays arounds with and elaborates on the central classical theme, so much so that I wish Mondo Boys had expanded on their score material and inserted extra cues to provide a proper concept album. It deserves more than 19 minutes. 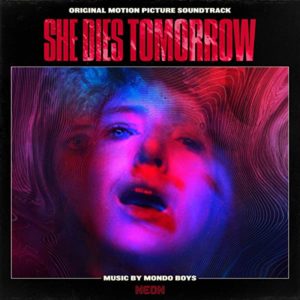