Anticipating City Lights Symphony Orchestra‘s second album of film music, also on Prospero, we look back at their surprise debut release dedicated to the music of John Williams.

First known for live-to-picture concerts, the Lucerne-based orchestra released their debut album – Spotlight on John Williams – in 2021, containing highlights from the enormous catalogue of the legendary composer. The orchestra is firmly led by conductor Kevin Griffiths, whose earlier recording projects mainly feature music by lesser known classical composers. This new album offers a generous playtime of 100 minutes, divided into orchestral works on the first disc and orchestral works with soloists on the second.

Most of the pieces are either concert arrangements of themes or short suites of highlights. We do get the complete suite from Star Wars: Episode VII: The Force Awakens (2015), and we are also treated to an extended concerto of sorts, in the Escapades for Alto Saxophone and Orchestra, adapted from the composer’s Catch Me If You Can score (2002). There, as elsewhere, the soloist delivers.

On compilations such as these, it’s inevitable that many of the composer’s best known pieces are included. Still, the producers managed to find room for a few less-recorded pieces, such as «End Credits» from Indiana Jones and the Temple of Doom (1984), «Theme» from JFK (1991), «Opening» from The Adventures of Tintin (2011), and a string of unusual suspects from the first three Harry Potter films; «The Chamber of Secrets», «Fawkes the Phoenix», «Witches, Wands and Wizards» and «Nimbus 2000». A few more of Williams’ less recorded pieces would always be welcome, but I think they managed to find a good balance between the best known and the less well known music. If you want a taste of the more obscure Williams, seek out Lights, Camera, Music! (2017) with Keith Lockhart conducting Williams’ old gang The Boston Pops.

On Spotlight on John Williams, the orchestra plays with a cripsness, alertness and precision that’s admirable. Another strength is the energy of the performances, which is imbued in most of the pieces throughout the album. A fine example is the «March» from Superman: The Movie (1978), which is only slightly diminished by an impatient trumpeteer by the end of a theme statement (1:15), or perhaps it’s an editing issue that makes it sound rushed.

There is a good clarity and transparency of sound throughout the album, which allows one to hear inner melodic lines not easily observed in other recordings, such as in the «Overture» from The Cowboys (1972). The brass has the appropriate weight, and the woodwinds have a good presence. There is just the right amount of room ambience to give the music the necessary glow without obscuring anything. The lower end of the frequency spectrum is thankfully not given an exaggerated focus, but it has just enough presence for this kind of music. Tracks such as «Theme» from JFK and «Main Theme» from Born on the Fourth of July (1989) are the musical equivalent of a warm blanket.

Although there is evidence of dynamic compression on the album, this reviewer was not distracted by it. There are a few instances where an edit might be audible, manifested in a sudden change in musical impetus, however slightly. Again, I’m unsure whether this really is an edit or just a facet of the performance.

If the first-rate presentation of the music wasn’t enough, Prospero has chosen to showcase a key benefit of the physical format: the packaging. The shiny discs come in a lavish digibook format with professional looking artwork and informative liner notes, really making it a celebration of the composer.

This album is kind of what I hoped Gustavo Dudamel’s album would be, Celebrating John Williams (2019). Alas, that disappointed with fuzzy acoustics, obstructing more details than it should have. Granted, it is a live album, but I still expect better sound engineering from a Deutsche Grammophon release. I also prefer Prospero’s album over the recent live albums with the Vienna and Berlin Philharmonic orchestras, both conducted by the man himself. Although the acoustics are good, these albums are let down by slow tempi and, in the case of Vienna, a lack of rehearsal. Spotlight on John Williams is free from such plagues, and if you want 100 minutes of well crafted feel-good music that’s both well performed and recorded, this is as clear a recommendation as there can be. 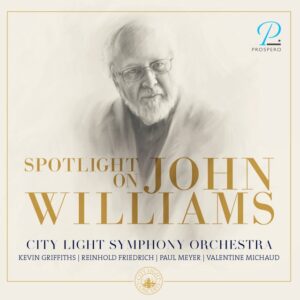