Still regarded by many as the best Star Trek movie yet made, Nicholas Meyer’s Star Trek II: The Wrath of Khan (1982) is also, arguably, the film that ensured the futures of both the Star Trek franchise itself as well as James Horner’s career as one of Hollywood’s top composers. This new 2 CD set from La-La Land Records lets us enjoy Horner’s thrilling, spirited score in better sound than ever before.

After the majestic and visually impressive, but unemotional and slow-moving grandeur of 1979’s Star Trek: The Motion Picture, the tone of Star Trek on the big screen changed dramatically with The Wrath of Khan. Made on a fraction of the budget of the first film, the sequel has a much more intimate feel, emphasizing themes like friendship and aging – and revenge, with Khan (Ricardo Montalban) being the genetically enhanced antagonist exiled to a barren planet by Captain Kirk in the original series 1967 episode “Space Seed”, to which the film is a sequel of sorts.

Still, as is often the case with theatrical Star Trek, the stakes are high in the main story, revolving as it does around the “Genesis device”, capable of terraforming lifeless planets in record time, while also having terrible potential as a weapon of mass destruction.

Jerry Goldsmith composed an amazing score for the 1979 movie, but with budgetary constraints now leaving him out of the picture, the producers instead took the chance on an up-and-coming James Horner, whose effort more than satisfied both the filmmakers and most Star Trek fans and film music enthusiasts.

After having been being blown away by Goldsmith’s music for The Motion Picture, I was at first disappointed with Horner’s score for the sequel, primarily because I found his main theme forced and unimaginative, as compared to Goldsmith’s bright and forward-thrusting title music for The Motion Picture. That’s an impression that still lingers, but there’s certainly much else to enjoy in what Horner does here.

While Goldsmith’s effort for The Motion Picture often reflected the seriousness of the story, Horner’s score is unashamedly adventurous and extrovert, wonderfully enhancing the space opera elements of the film. Horner’s action cues are well-crafted and exciting, often preceded by tense, edge-of-your-seat buildups («Surprise Attack», «Kirk´s Explosive Reply», «Genesis Countdown», and the score’s major set piece, «Battle in the Mutara Nebula»). The orchestra has their work cut out for them in these cues, with many of them demanding virtuoso playing. Similarly, more uplifting and joyous tracks like «Enterprise Clears Moorings» and «Epilogue and End Title» adds to the excitement.

Tense, dissonant and sometimes violent accompaniment underscores the machinations and deeds of evil genius Khan, as in «Kahn’s Pets», «Inside Regula One» and «Captain Terrell’s Death». Horner supplies a claustrophobic, narrow-interval motif for the character, often underlined by a slow, ominously throbbing rhythm in low strings, reinforcing the menace.

A completely different, benevolent form of genius is illustrated by Horner’s introspective and mystical music for Spock, often performed by the distinctive combination of tuned metal rods, pan pipes and recorder («Spock», «Kirk Takes Command», «Spock and Kirk»). Paradoxically, but perhaps intended as a comment on the character’s conflicted nature, the film’s most emotional music is for the emotion-repressing Vulcan.

The main element carried over from Goldsmith’s score is the use of the blaster beam; a huge, otherworldly-sounding percussion instrument (performed in both The Motion Picture and The Wrath of Khan by its inventor, Craig Huxley). But otherwise, Horner’s score does lack most of Goldsmith’s unusual and experimental orchestral and electro-acoustic sounds, staying, with a few exceptions, within the traditional symphonic realm.

The original 1982 LP (and later CD) release had a notoriously pinched and compressed sound, something that was to a large extent rectified by Film Score Monthly’s expanded release in 2009. While the sonic shortcomings of the original recording can never be completely eliminated, some more orchestral detail can be heard in La-La Land’s release, and a bit more natural reverb from the recording studio is also present, further opening up the sound. This is also the first time the original LP program is available in better sound.

While not brimming with the orchestral inventiveness of Goldsmith’s 1979 score, this is still a solid symphonic work, and quite an impressive accomplishment from a 28-year-old composer already demonstrating considerable mastery of writing for the symphony orchestra. It set the stage for an amazing, though tragically shortened, 30+ year career of composing some of the most expressive and dynamic scores in modern Hollywood.

The remastered edition is currently not available for streaming, but can be purchased and sampled at LaLaLand Records’ site. 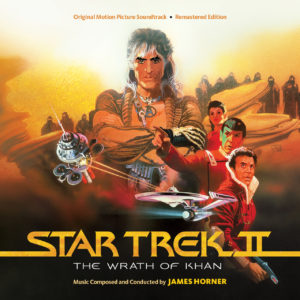