After Enterprise finished its run in 2005, Star Trek on television went into a twelve year hiatus, until the franchise was relaunched for the small screen in 2017 with Star Trek: Discovery. This was followed by Star Trek: Picard in early 2020 (available on Amazon Prime in Europe), with two more seasons of the series already in the pipeline. As composer for both shows, Jeff Russo faced the daunting task of carrying Trek’s magnificent musical lineage forward – something he is handling very well indeed.

Picard is set some 20 years after the last Star Trek: The Next Generation movie, Nemesis (2002), and the series depicts an elderly Jean-Luc Picard (Patrick Stewart) still haunted by the self-sacrifice of his friend and colleague, the android Data (Brent Spiner), at the end of that film. This becomes the framework for the series’ comments and deliberations on artificial intelligence and artificial life.

As with Discovery, the show is darker and grittier than previous Trek incarnations, with Star Trek creator Gene Roddenberry’s bright, optimistic vision of the future largely left behind. Understandable for a show that wants to follow the prevalent trends in the genre, but a bit disappointing and frustrating for long-time Trek fans like myself. On the positive side, the main characters are well fleshed out, with interesting back stories and a strong focus on their relationships, and there are some fun and touching moments for viewers well versed in Trek lore. The show’s production design and effects are on a feature film level, making every episode a feast for the eyes.

The producers’ composer of choice for current live-action Trek is Jeff Russo, who has been an extremely productive composer for television during the last ten years or so. Rising to prominence with his music for Fargo (2014-), among his credits are several other high-profile shows, often in the science fiction or fantasy realm, like Lucifer (2016-), Altered Carbon (2018-2020) and The Umbrella Academy (2019-), as well as a few feature films.

Any composer new to the Star Trek universe has some big shoes to fill. While perhaps never having achieved the same world-wide recognition as the music for that other big “Star” franchise – Star Wars – Star Trek’s musical heritage is long and illustrious; from the iconic 1960s original series music by Alexander Courage, Fred Steiner, Gerald Fried and others, via the more subdued, but often quite beautiful, accompaniment to the 80s and 90s TV shows, to the big, symphonic scores for the 1979-2016 movie series by the likes of Jerry Goldsmith, James Horner and Michael Giacchino. With his music for Picard, Russo does a good job merging what has come before with the needs and norms of current TV scoring.

Russo‘s main theme – always an important element of any Trek show – is lyrical, noble and melancholic, beautifully introduced in solo cello. It’s a spot-on musical representation of Picard at this stage in his life, and a definite step up from the composer’s rather bland Discovery title music. Russo supplies a quite different and a little more upbeat melody for the end titles, this time with clear nods to Goldsmith’s movie/Next Generation theme. At appropriate moments, we also get citations of Alexander Courage’s original Star Trek fanfare, as well as the equally well-known Goldsmith theme. In fact, Russo references these much more frequently than his own main theme. Other well-integrated throwbacks to Trek’s musical roots occur when Russo reprises Fred Steiner’s menacing original series theme for the scheming Romulans, who are integral to the plot of Picard.

Russo scores the episodes with a mix of orchestra and synths, but the overall impression is decidedly orchestral, though rarely fully symphonic. Electronics are used mainly to create rhythmic drive in the action sequences, and to supply ominous, sustained sounds for tension and suspense. Almost every track is highly listenable, staying firmly in the tonal and melodic realm, with more dissonant and experimental soundscapes relegated to only a few cues. The action music has a consistent, but varied rhythmic energy that make these cues engaging and listenable, as in «Mystery Ship», «Unexpected Visitor» and «Romulans Arrive, Pt 2». These are some of the instances where Russo employs the full resources of the orchestra, to exciting, pulse-pounding effect.  Russo’s orchestrations are relatively transparent throughout, making even these intense tracks quite easy on the ear.

The composer utilizes some recurring core ideas, one of the most dominant being the use of ostinatos. Fortunately, they are mostly not of the loud, generic kind that is so ubiquitous in current genre scoring – although, as in the aforementioned action tracks, they can be quite hard-hitting. But usually, Russo presents more low-key variants in strings and percussion for suspense and tension («Leaving with Maddox», «Narek Escapes»). In «Twins», electronics and melodic percussion create a glassy, hypnotic mood. Gentle ostinatos are also present for lighter or comedic sequences, while tracks like «Raffi Calls Bosch» and «Soji and Narek Waltz» have an almost classical or even baroque feel. Dark, industrial, rhythmic synths do emerge sometimes, particularly in scenes set on the crashed Borg ship during the latter half of the season, commenting on the destiny of this now near-extinct cybernetic species («Borg Cube», «Looking for Picard»).

But even more prominent than the ostinatos are quiet, lyrical passages for strings, woodwinds, piano and synths. Perhaps surprisingly, given the topic and tone of the show, this is the mood that dominates throughout. The composer puts much more emphasis on the emotional state of the characters, and their relationships, than on physical action – at least for the soundtrack release.

For these emotional and melancholic sequences, Russo’s music is remarkably thoughtful and gentle, often with the warm sound of the cello as the leading voice. There are plenty of wonderful tracks in this mode, with some standouts being «Picard Bids Farewell», with introspective piano and acoustic guitar on a bed of melodic percussion and shimmering, sustained string/synth chords; the airy and lovely harp and flute of «Picard Leaves Elnor»; and «Talking to Data», for the heartbreaking, final virtual reality meeting between Picard and his long-lost friend. When Russo underscores this scene with searching, tender chord progressions in strings and otherworldly synths, and gentle piano and string phrases on top, it’s enough to melt any Trek fan’s heart.

While consistently attractive and of a high quality, the two and a half hour running time of the release is too much for a single sitting, and I would have preferred an episode-by-episode presentation, making it easier to divide the material into more manageable chunks. Still, given its excellent listenability, any 30 or even 60 minute listener-curated section of this release can definitely be recommended. 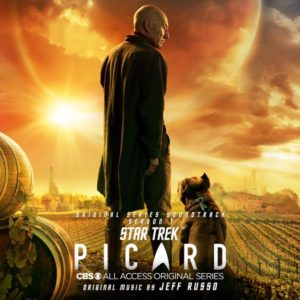