Succession (2018-) is an HBO series created by Jesse Armstrong, about an elderly media mogul and his family members vying for power. Two seasons have aired, while a third is forthcoming once production resumes after the covid-19 pandemic. The series has been praised by both critics and audiences, and was recently one of the big winners at the 2020 Emmy Awards.

The main attraction of the series is the cast; the dynamic ebb and flow as the power structures between the patriarch Logan Roy (Brian Cox) and his children fluctuate throughout the story. A point of both fascination and frustration is the absence of a proper protagonist; a character whose moral traits are preferred over the others. All the characters are problematic somehow, and you’ll find that sympathies shift from one to the other depending on the choices they make. This obviously gives it a realistic vibe, but it also challenges the very way we consume fiction.

The score is by Nicholas Britell (b. 1980), who broke through with Natalie Portman’s New York, I Love You (2008), but has since garnered acclaim through his work with directors Barry Jenkins (Moonlight, If Beale Street Could Talk) and Adam McKay (The Big Short, Vice). He often subscribes to an experimental aesthetic that eschews Hollywood melodrama in favour of more restrained, European-style soundscapes.

In all honesty, I’ve not been a particularly big fan of Britell’s work so far, nor the überpraised Barry Jenkins movies for which he’s written the music. Which is why Succession took me by such surprise; displaying a side of him that I wasn’t aware of – a more classical, developped style that plays around with a wide array of orchestrational details.

Britell has released two soundtracks from the series, one for each season. At the center of them both is the theme you hear over the opening credits – a faux-baroque theme clashing with laidback hip hop beats. It’s a brilliant idea – the stuffiness of old British aristocracy transposed to a contemporary US setting; a warped comment on the cynicism of “high life” Americans. While the scores aren’t mono-thematic, strictly speaking, Britell mostly re-arranges this theme with various instrument groups throughout the show, depending on emotional value.

Volume 1 is perhaps on the repetitive side, but showcases a few wonderful arrangements, like the urgent «Clarinets and Strings» or the broad «End Title Theme (Strings Variation)». Volume 2, however, is a richer listening experience – from the lushness of «Rondo in F Minor for Piano and Orchestra  – Kendall’s Journey» to the breakbeats of «Roman’s Beat – Hearts» or the song versions at the end.

You’d think that the many variations wear out their welcome eventually, but Britell skillfully re-arranges the material to an almost unrecognizable level at times, occasionally interspersing them with more modern tracks for variety. Moreover, the minimalist, circular movements of the pieces result in a forward momentum that mirrors the scheming, plotting and eventual fate of the characters. Finally, a thoughtful, restrained selection of 38 minutes on Volume 1 and 43 minutes on Volume 2 keeps the interest up for the duration.

Succession is a great ‘idea’ score, both in sound and execution, that comes off as an entertaining exercise in orchestration and variation. While both volumes are worth having, the second season album is the best and most varied. The rating below is a combination of the two. 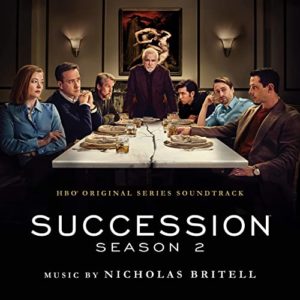