Tales from the Loop (2020-) is a science fiction series on Amazon Prime, based on the work of Swedish artist Simon Stålenhag – inserting well-worn, futuristic buildings and equipment into a Swedish, socialrealistic setting. With a string of famous directors attached (like Mark Romanek, Jodie Foster, Andrew Stanton and Ti West), it promises to be an ambitious anthology series of stories – loosely connected – that uses basic concepts such as alternate dimensions and body swaps to explore the human condition on an intimate level.

However, it only succeeds moderately in its ambition. The science fiction element (i.e. the Stephen King-like aspect of a small midwestern town harbouring a facility with paranormal capabilities) is completely relegated to the background, offering instead a personal, slow-moving and moody depiction of human turmoil. Which is fine as an aesthetic choice, but it becomes both incessant and pretentious in its apathy and frustration, so self-aware in many of its stagings that it more often than not becomes a point of irritation.

Legendary minimalist composer Philip Glass (b. 1937) needs no introduction, probably the most influential classical (and film) composer in the last half century. His younger collaborator in this case, Scotsman Paul Leonard-Morgan (b. 1974) is still most famous for his two science fiction films Limitless (2011) and Dredd (2012), the latter boasting a sharp, fuzzy synth score reminiscent of John Murphy.

Philip Glass has become his own worst enemy, in a way. Unlike colleagues Steve Reich, Terry Riley and Mychael Nyman, it’s his particular form of minimalism that has become the benchmark for a lot of film and TV music in the last couple of decades. In fact, one could argue that there’s a whole trend sound emanating from his work, the post-minimalist romanticism; popular since the mid 2000s, and  – in fact – reaching some form of saturation point now. This is what Glass has to deal with whenever he returns to scoring himself these days.

Tales from the Loop is not an unpleasant score or album, but it’s basically Glass approximating a sound that is in itself an approximation of him – as if it’s Glass doing Max Richter doing Glass. At its center is the descending piano motif swirling around 3 half notes, as heard over «Walk to School» or «Blink of an Eye», sometimes accompanied by cautious strings and woodwinds, like «Hope». Over the course of 71 minutes, it eventually wears out its welcome – even if there’s no telling where Glass ends and Leonard-Morgan begins. Like a copy of a copy, it becomes pale and colourless.

The second problem is the score’s use within the series itself, constantly hovering in and around the images and chararacters like an insistant reminder of how poetic and introvert it’s all supposed to be; how alternative and “fresh”. Alas, the opposite is achieved, as one constantly feels irritated and alienated by the vague rhetoric, as if it’s secondhand Terrence Malick. It boggles the mind why the producers didn’t instead opt for the gorgeous, Vangelis-like sounds and music Stålenhag himself produced as accompaniment to his artwork, like the wonderful album The Electric State (2017).

For all its suggestive, slow-moving, ethereal colours, Glass’ and Leonard-Morgan’s Tales from the Loop instead hammers you over the head with dreary, soulless, post-minimalist tropes that is better served in more capable hands these days. 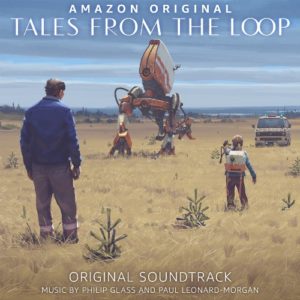 Harsh, but honest pocket review of Philip Glass and Paul Leonard-Morgan's TALES FROM THE LOOP, by Thor Joachim Haga: http://celluloidtunes.no/tales-from-the-loop-philip-glass-paul-leonard-morgan/