US record label Notefornote Music has been on a Hans Zimmer roll in the last few months, having released on CD no less than three scores from the 1980s by the popular composer: The Wind (1986),  The Zero Boys (1986) (both co-composed with his mentor Stanley Myers) and Terminal Exposure (1987). All of these films were directed by Greek-born Nico Mastorakis.

Terminal Exposure, certainly no box office hit, was a crime comedy concerning two guys accidentally capturing a murder on film and their quest to capture the murderess. It included a highly fun score by a 30-year-old Zimmer, in one of the first films where he didn’t have Myers’ expertise to lean on. He buckled up in his usual London studio Lillie Yard together with engineer/mixer Al Clay and musicians/composers Mel Wesson and Roger Bolton and sculpted a fitting and mostly electronic score typical of its time.

The CD features 30 minutes of Zimmer material, 10 minutes composed by Wesson and 2 minutes by Bolton. Wesson had never worked on a movie before and stated in a recent comment that he had really no idea what he was doing at that stage. Nevertheless, he has now worked with Zimmer (and other well-known composers like James Newton Howard) for 35 years on lots of different projects, mostly as arranger and music designer.

The CD features 18 tracks, most of them put together from different shorter cues. If this had not been done, the album would have had a staccato listening experience across 43 short cues. Now there is a certain cohesiveness to it all, making it flow quite easily. This is further helped by the poppy nature of the score that is easy on the ear, and the excellent sound quality. There is a theme for the female character Christie (played by Hope Marie Carlton) that I would have loved to hear more; it sounds like an early version of Zimmer’s theme from Days of Thunder (1990). There are also hints of Harold Faltermeyer’s bouncy style, like in «Wet Cats». Fun to think that when this film was made, Faltermeyer was a far more well-known name in Hollywood than the unknown Hans Zimmer. As we all know, that would soon change.

There are a few session musicians that are not mentioned in the rather unimpressive 4-page booklet: Sax player Brian Gulland shines on a few tracks, and none other than Thin Lizzy’s Brian Robertson performs the electric guitar on «I’ve Got Her Hostage/Stunts On Wheels», a track that is almost a forerunner to Zimmer’s famous «Las Vegas» from Rain Man (1988) and that ends with a snippet that also appeared in The Wind, Black Rain and Bird on a Wire. Zimmer also dips into a synth jazz/big band style occasionally (maybe the least successful element), with even the German national anthem making a surprise appearance! Roger Bolton’s sole track is a percussion-dominated cue, while Mel Wesson is very playful, poppy and up-tempo on his 6 selections. On Wesson’s track «Bruce Plays Goosbury», sax player Gulland had apparently gone home, since there is an electronic sax sound evident here.

Terminal Exposure is a highly enjoyable score, typical for its time. Once more we must thank Notefornote Music for rescuing obscure 80s scores from oblivion. The CD is limited to 1000 copies and is not available on streaming or download. 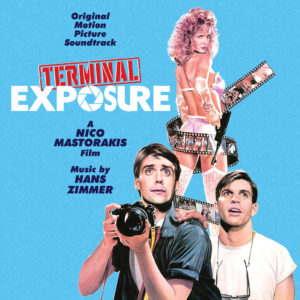