The Elephant Queen (2019) is an ambitious nature documentary directed by Victoria Stone and Mark Deeble, about a group of elephants and their 50-year-old matriarch. Forced by a drought to leave their home area, it becomes a ‘road movie’ of sorts as they traverse the savanna to reach a new, sustainable waterhole to live by. The film is narrated by Chiwetel Ejiofor, and is available on Apple TV+.

The film is somewhat of a frustrating experience. One the one hand, it’s a very moving and harrowing tale about the realities of African wildlife (including an extremely heartwrenching death scene), dipped in stupendous cinematography. On the other hand, it has certain ‘family-friendly’ elements that don’t sit well with me, including the anthropomorphization of animal behaviour – most evident  in the editing and added sound effects. It’s cute, and it underlines the epic, Disney-like story it wants to tell, but it also betrays a more consistent tone.

The score is by British composer Alex Heffes (b. 1976). Heffes was introduced to the world of film music by becoming Simon Boswell’s assistant in the 90s, before launching his own composing career in 1999. Since then, he’s done several acclaimed pictures, like The Last King of Scotland (2006) and Mandela: The Long Walk to Freedom (2013). Particularly impressive, at least to me, are The First Grader (2010) and another nature documentary, Earth: One Amazing Day (2017), in which he displays intricate, consonant orchestral music with great dynamic range and pronounced themes.

Much like the film, Heffes’ score is also marked by a dual tone – one the one hand whimsical and family-friendly mickey-mousing, on the other hand soaring high and mighty while capturing the scope of the surroundings and the serious undercurrent of the narrative. The last part is unquestionably the best.

For the latter, Heffes pulls out all the ethnic stops, as if it were The Lion King itself. All the West-African tropes, with tribal percussion, voices and exotic wind instruments dominate throughout tracks such as «The Waterhole and Enter The Queen», the highlife-infused «Weve and the Tribe», «The Great Flocks», «The Refuge» and most of the end of the album. Almost on the brink of overkill, but it’s portioned out throughout the album.

There are also moments of beautiful lyricism, especially the tracks surrounding a pivotal moment in the film. «Mimi Tires» and «Motherly Love» refuse to paint the tragic circumstances in melodramatic strokes; instead Heffes provides restrained, largely chord-driven cues with distant voices, woodwinds and strings that allow the audience space to feel on its own terms.

However, it’s worth noting that there are less appealing parts of the album, like the reliance on references to denote a dung beetle’s struggles; Wagner’s «Ride of the Valkyrie», Thomas Newman-like “quirkisms” and spaghetti western clichées are all used to describe its flight and fight modes, in tracks such as «Ride of the Dung Beetle» and «Dung Beetle is on a Mission». Also, there are several tracks that just stay in a static mode, without either thematic development or particularly interesting colours.

At its best, The Elephant Queen is close to matching the “George Fenton benchmark” of nature documentary scoring. At its worst, it seems somewhat meandering. But at no point does Heffes disprove his status as one of the most exciting film composers of his generation. This is well worth a listen. 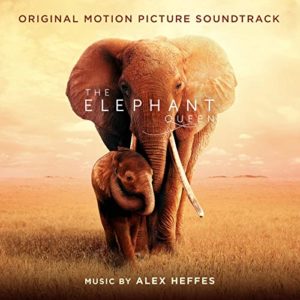