The Glorias (2020) is a biopic about iconic feminist Gloria Steinem, by film and theatre director Julie Taymour – her first feature film since Across the Universe (2007) that is not based on a play. Running two and a half hours, it covers the crucial moments of Steinem’s life and achievements – embodied most prominently by Julianne Moore and Alicia Vikander. Steinem, of course, is still alive at 86 and continues to be a spokesperson for women’s rights.

The film does become a bit sluggish and preachy at times, but its narrative structure is interesting: Taking its point-of-departure in a moving Greyhound bus – the image of a nation moving forward, perhaps; with four “Glorias” in different stages of her life as its passengers – it then veers off into different seminal moments of her past. It’s not chronological, but rather associative in nature – tuning in on the victories and setbacks of both her personal life and The Cause. These things are – after all – always messy, never a straightforward line.

Predictably, the music is by Taymour’s long-time partner Elliot Goldenthal. In our two interviews with Goldenthal – now a decade old – he professed his departure from big Hollywood action films, and his desire to focus on smaller and more personal projects in the time to come. As such, the rarity of his film music assignments in the last decade makes a new Goldenthal score an “event”, whether for a big or small film. Like this.

Those expecting another huge, orchestral score in the style of Final Fantasy: The Spirits Within (2001) or Alien 3 (1992) will be disappointed. This is not it. Rather, it’s an eclectic mix of styles mirroring the almost panoptical nature of the film.

At its center is a rural, Americana-infused element, often driven by twangy electric guitar, melancholic piano and cautious strings – like in «The Greyhound», «Her Solitudes», «Passing an Elegy» or «A Torch Passed». It gets a more solemn, grandiose variation when the cause is placed upfront and center, like in the highlight track «We the People». While these elements are more textural than thematic, they are generally associated with Gloria’s humanity as it relates to the national spirit.

However, as the film moves through both different time periods and locations, Goldenthal plays around with different idioms – like the Indian elements in «Jaipur Station», the period jazz in «Steinemite Jukebox» and «Slow Dance With Two» or the 70s funk in «Bella’s Hat».

While none of this material necessarily screams Goldenthal in style and sound, two tracks remind us of their origin: «Treadmill Agitato», with its agitated string clusters reminiscent of S.W.A.T. (2003) or Alien 3, and the «The Witch’s Brew», a devilish gypsye dance for a stylized sequence in the film that sends immediate associations to Taymour and Goldenthal’s theatre work, primarily Juan Darién: A Carnival Mass (1988).

The Glorias is first and foremost a tribute to Goldenthal’s playful spirit; his unique way of appropriating all types of music into his idiosyncratic sound. But – with a few exceptions – it is also relatively subtle, allowing the story and cause space to communicate without unnecessary musical rhetorics. It will, however, not light up any fans looking for a return to his larger, epic sound. For that, we might instead hope for a recording of his new concert piece October Light.

PS. A small piece of trivia: Elliot Goldenthal himself appears in a small cameo towards the end of the film, as he sits behind the real-life Gloria Steinem on the Greyhound bus. 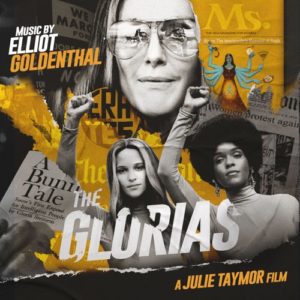