For a younger generation of film music enthusiasts around the world, James Horner might no longer be the best known movie score composer. After James Cameron’s huge success with Avatar, Horner became less productive in his output, and the movies he wrote for were not the blockbuster successes of earlier years. So it’s warming to see a collection of his accomplishments be released by the always enthusiastic City Of Prague Philharmonic.

Though he had written music for a number of B-films before before 1982, James Horner first came into mainstream consciousness with his epic score for Star Trek II: Wrath of Khan (1982). Following in the footsteps of Jerry Goldsmith’s unusually massive orchestration on Star Trek The Motion Picture (1979), it was a fresh and original score. It sounded arguably like nothing else previous to it, mixing a small orchestra with electronic instruments to create an eerie ‘out of this world’ effect, combined with a more classical action adventure style.

Building on some of the instrumental language of Jerry Goldsmith’s score, The Wrath of Khan found its own orchestral language that Horner would revisit again and again throughout his repertoire. Long sweeping strings sustain waves of romantic elation, while wind instruments pipe in for embellishment and rhythm. Then a sudden reversal: strings dance and wind and horns carry the long lines of melody in something reminiscent of Horatio Hornblower. At times, the result is a truly unique sound palette. It’s hard to put a finger on Horner’s unique choices, but all feels very unlike many of the formulaic scores found in Hollywood films. In the sequel Star Trek III: The Search for Spock (1984), a larger orchestra was able to realize some of the original vision in fuller colour.

It didn’t take long before Horner caught the attention of other directors – most notably Ron Howard who would be a mainstay collaborator for the rest of his career, and James Cameron who commissioned him for Aliens (1986). Perhaps his most well known and evocative scores are Titanic (with its hit song «My Heart Will Go On» sung by Celine Dion) and Braveheart (1995), Mel Gibson’s equally epic film about William Wallace, a late 13th-century Scottish warrior who led the Scots in the First War of Scottish Independence against King Edward I of England. The world music-inspired Avatar (2009) took a completely different direction, even as it pulls standard Horner chords out of its feathers.

In spite of being one of the major film composers of the past decades, it’s surprisingly difficult to get hold of quality recordings of a lot of Horner’s music. Compared to the major releases of other film composers, the CDs of Horner’s music are often short and poorly mastered – as if the directors didn’t believe in the music as a central part of the films. So I’ve found myself waiting for remastered re-issues that never came.  Fortunately, in 2011, The City of Prague Orchestra released The Music of James Horner, collecting a double CD anthology of superbly recorded performances that document and honour his career.

The Prague outfit has gained a reputation for making movie releases over the years, and their skill in reproducing the great film works has only grown over the years. I would say that the performances on this CD are more or less equal to the originals in nearly all cases (except for the replacement of Celine Dion’s voice on «My Heart Will Go On»). The selection of music is representative, and satisfying – though I missed some personal favourites like Sneakers (1992), Enemy at the Gates (2001) and The Name of The Rose (1986), all of which were original and effective scores. A Beautiful Mind (2001) is included, perhaps because it was nominated for an award, but from a Horner perspective, it was something of a rehash of Sneakers, which to me feels fresher and a better composition.

There is not too much to say about the recording itself. The quality is good, both in terms of performance and sound recording. It is not available in high resolution, but is digitally mastered, so CD quality is the best option for HiFi buffs. Like most compendiums, the selection of music is strongly theme-oriented – it’s a collection of pop hits – but that reflects Horner’s music too. Even his background sections were strongly thematic, not usually just sound carpeting. The most prominent exception is perhaps Aliens, with its militaristic drums and rhythms allowing space for the intense action.

The collection opens with Karate Kid (2010) – a gentle but sweeping romance that seems to waltz lovingly in 4/4 across panoramic scenery, interspersed with a melancholic piano that sprinkles blessings on the listener. Then the war cue from Avatar picks up the pace (an odd choice from so much goodness in that exceptional score). Then we move through many classics, including the Oscar nominated Apollo 13 (1995). Two lesser known childrens’ movie themes add some light humour to the mix with We’re Back – A Dinosaur Story (1993) (which is reminiscent of the humorous escape in Star Trek III), and Land Before Time (1988),  and there is the bombastic march from Willow (1988). Some of my personal favourites are the excepts from Braveheart, Deep Impact(1998), and Cocoon (1985), which in some ways are better than the original recordings, and the latter two are quite underrated.

In interviews throughout the years, Horner revealed some of his own preferences and regrets. He indicated that he felt little for the science fiction movies he scored, in spite of their cult status. He sought romantic themes and emotional content over action. His style was unambiguously romantic, preferring broad lyrical lines over intense “notey” music – to use John Williams’ term. He also wrote some outstanding songs, for movies like Troy (2004), Titanic and Avatar. Horner was willing to mix synthesizers (especially pads) with the orchestra, where others may have used strings or a choir. Notable for his horn work, and broad sweeping melodies, it stands in stark contrast to the note-rich approach of John Williams.

What is perhaps easy to overlook is just how many styles Horner was able to write for and arrange, from raw piano, to classical, jazz ensemble – even including Glen Miller big band jazz in Cocoon, for instance – and how he could use smaller ensembles to create “big music”. Comparing the recordings of those early movies to the orchestral palettes of current films, they sound small and claustrophobic, yet that’s not the impression one has from the movies.

Horner was classically trained, and loved to drop in a bit of Prokofiev or Shostakovich into his scores. He was accused of plagiarism in some reviews, but I suspect this was his way off tipping his hat to the great composers of the past, as well as saving time under duress, because it was absolutely explicit, if not a bit repetitive. He constantly came back to Khachaturian’s Gayaneh Adagio (made famous in the crew scenes of 2001: A Space Odyssey), and he quoted Shostakovich’s 11th symphony in both The Enemy At the Gates and Patriot Games (1992).  He cited Prokofiev’s Alexander Nevsky (1938) several times as well as Britten’s War Requiem in Troy. One of his best scores Glory (1989) also has a Carmina Burana-like chorus. Horner’s choral work could be outstanding.

Horner complained too of the budget for music being undercut in movies, and creative struggles with directors repeatedly in interviews – two issues that seemed to cause him anxiety, but that doesn’t compromise the sense of craftsmanship behind his orchestrations. These may have affected his choices in later years. He turned down Peter Jackson’s Lord of the Rings to avoid being away from family in New Zealand for the duration of the project, but he often stepped in a short notice on films like Troy and Aliens. He told one reporter that the music for Aliens had to be written essentially in a single week, due to delays in production, and that he was unable to implement all the things he and Cameron wanted from it. Perhaps that’s why one hears phrases (even whole passages) of music from Star Trek, to be recycled again in later films.

All in all, one has the impression of a humble and deeply sensitive man who struggled with the constraints of subject matter and fickle directors. In his TED talk he is clearly sensitive to this issue of being identified with a “style”, and the lack of creative control over his music. He did reuse passages and musical phrasings across several movies which contributed to the idea of self-plagiarism, though no more than Shostakovich himself did, for instance. Horner lamented the time during the 1990s when directors found it preferable to use pop music in films rather than more classical ensembles, but must have been happy about the revival of film music in the 21st century. Whatever his differences with directors, like many film composers, he eventually found willing partners in several directors who appreciated his talent -namely Ron Howard, James Cameron, and Mel Gibson.

Horner won awards and nominations for his work, and together with John Williams his music tops listeners’ choices on radio stations, appealing to a popular audience.  He was killed tragically in a light plane crash in 2015, leaving behind a wife and daughters. Together with Avatar and Glory, The City of Prague recording is a worthy memorial compendium of themes, both original and borrowed, by one of the classic film composers of modern times. It also makes a nice gift collection of popular favourites for the festive season. 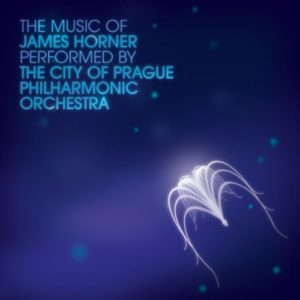