Now in its second season, The Orville is the brainchild of producer Seth McFarlane: a science fiction show set in a shiny, utopian future with the eponymous starship on a mission to…well, explore strange new worlds and seek out new life and new civilizations. Effectively McFarlane’s take on Star Trek: The Next Generation, The Orville’s scripts and filming style would fit right into that series, the main difference being the addition of McFarlane’s zany humor – which is a bit hit-and-miss, but for the most part works surprisingly well in this context. That being said, The Orville quite often tackles serious issues, with the episodes sometimes ending on a more sombre note than TNG usually did.

Not only a big fan of Star Trek but also of orchestral film music, McFarlane has enlisted some first class talent for the scoring duties: veterans Bruce Broughton, John Debney and Joel McNeely, and relative newcomer Andrew Cottee. This release from La-La Land Records contains a suite from all 12 season one episodes, typically around 10-12 minutes each. Broughton supplies the main theme and pilot score, while the bulk of the episodic underscoring is by Debney and McNeely, with five episodes each, and Cottee delivering one episode. It is all performed by a 75-piece orchestra – quite unheard of in today’s TV scoring.

Broughton sets the tone with his main theme – not quite a march, but bright and optimistic, and a perfect match for the show’s easygoing, breezy attitude. The four composers have similar, compatible styles, all working within the neoromantic, Williams-esque orchestral idiom, creating a high degree of musical unity between the episodes. Just as the show itself is a throwback to 80s and 90s genre storytelling, so it is with its music: Symphonic, thematic, consonant, carefully orchestrated, and given a prominent place in the episodes’ soundscape. There is plenty for the orchestral film music fan to enjoy, and the album is consistently entertaining.

The tracks run the gamut of moods and emotions, from beauty and melancholy to suspense, action and even a hint of horror. Highlights include Broughton’s shimmering and uplifting «Shuttle to the Ship», McNeely’s «Dorahl / The Roof Opens», with its lyrical and attractive sense of wonder, and the thrilling mixed-meter action rhythms of «Trip to the Mountains», also by McNeely. From Debney, there is the beautiful and seductive «Pria’s Theme», and he also contributes the album’s closest thing to a set piece, the six-minute «Bringing Lysella Aboard / Casting the Votes / Their World Can Do Better». After a lyrical and uplifting introduction, it soon shifts gears into a suspenseful and exciting build-up, breaking the symphonic mold with some groovy Zimmer-school synth ostinatos, before finishing with another quiet, lovely sequence.

And Cottee certainly holds his own among the veterans, with his own voice shining through in the orchestrations. There are some wonderful harmonizations and motifs in his quieter cues, like «Within the Anomaly» and «Commander Lamarr».

The composers know their sci fi film music history well, and from time to time we get a near-quote from a genre favorite: A snippet from Goldsmith’s Star Trek: The Motion Picture here, a hint of Williams’ Star Wars there, a riff from Horner’s Star Trek II: The Wrath of Khan over here. In a different context, this could easily be dismissed as laziness, but in this case it’s clearly a conscious decision by the composers and/or McFarlane, intended as part tongue-in-cheek and part tribute and pastiche. It also creates an extra layer of fun for the film score enthusiast, who can play “spot the influence” while listening or watching.

None of these scores will win any originality contest, but what we do get is two and a half hours of solid orchestral fun from composers who deliver first rate craftsmanship within a well-established film musical vocabulary. 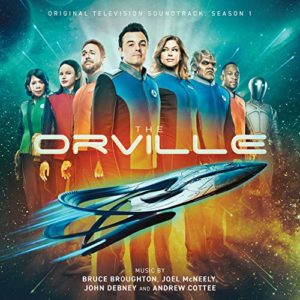