The Running Man (1987) is a dystopian action/sci-fi movie directed by Paul Michael Glaser, written by Stephen King under the pseudonym Richard Bachman. Set in 2017, it’s the story of Ben Richards (Arnold Schwarzenegger), a falsely convicted cop who must fight for his life and freedom in a Battle Royale-type TV show. German composer Harold Faltermeyer got the scoring gig through executive producer Keith Barish. Faltermeyer had scored hit movies Beverly Hills Cop, Fletch and Top Gun, and agreed to do The Running Man if he could score it from his Red Deer Studio in Munich.

Together with music editor Bob Badami and engineer Brian Reeves, Faltermeyer started sculpting the score, using a Synclavier for the first time, along with no less than eight Yamaha DX-7s. The composer would meet director Glaser only once, at the final sound mix in Hollywood. Varese Sarabande Records released the original soundtrack album at the film’s release in late 1987, but now, almost 33 years later, a deluxe edition of the score sees the light of day through the same record label.

This CD, limited to 2000 copies, features 35 tracks, totalling 68 minutes of music and a 16-page booklet with liner notes by Daniel Schweiger. The main theme is brilliant, as heard in the first track «Logo – Bakersfield». As usual, Harold Faltermeyer composes interesting action music, like «Fight/Escape», but what sets this apart from his earlier scores is an almost “symphonic vibe” in several tracks, such as «Richards’ Apt. Sneak». On other other hand, no Faltermeyer score without a synthpop track, and in this case the honour goes to «Captain Freedom’s Workout». If this track had been released as a single, it could very well have been a new «Axel F.» through its sheer catchiness.

The bulk of the album is made up of various modes and styles, easily passing from one to the other. «Medical Checkup» has peculiar effects in the soundscape, possibly the work of the Synclavier, while «Hawaii» sounds exactly as the name suggests. «Richards Lands/Come On Down» goes from dystopian unease to disco in a second, and «Subzero» is an exciting track with new elements, running for almost 4 minutes. A short snippet from Mozart’s The Marriage Of Figaro gets an electronic Faltermeyer treatment, before the almost celestial «Uplink». The electric guitar of Wesley Plass appears in several of the «Buzzsaw» cues; «Buzzsaw Attack» is almost speed metal in its execution. It’s interesting how the synth composers of the 1980s and 90s often worked with a rock guitarist on several of their scores, other examples being Duane Sciacqua for Sylvester Levay, Curt Neishloss for Gary Chang and Michael Thompson for Tim Truman.

Wagner’s «Ride of the Valkyries» works pretty well in Faltermeyer’s arrangement, before a wonderful rendition of the main theme appears in «Spare Dynamo/Laughlin Dies». The short «Death March» is actually composed by Jackie Jackson and Glen Barbee, but doesn’t sound too different from a Faltermeyer cue. «Fake Death» is busy and exciting, and «Killian Is Launched» is another nice track not on the original album. But the very best track on this record is actually the longest one, «Broadcast Attack», clocking in at 5:05. It’s an energetic and melodic rollercoaster ride of a track, showing just how appropriate Faltermeyer was for The Running Man.

This album does have a few omissions, though. The fun «Paula’s Theme», written by the aforementioned Jackson and Barbee, is nowhere to be found here, and the catchy end credits song «Restless Heart» sung by John Parr and co-written/produced by Faltermeyer is also missing, possibly due to a rights issue. A pity, as both of those tracks were an important part of the film, and they would have made this release almost unbeatable.

This new deluxe edition – a must-have for any Faltermeyer and synth fan – is also released as a double LP.

Neither the original album, nor the deluxe edition is available on Spotify, but the album can be purchased here. 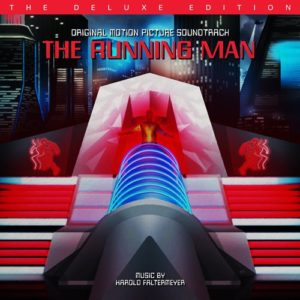