The Wind was a 1986 horror/thriller film directed by Greek filmmaker Nico Mastorakis. It starred Meg Foster as crime author Sian Anderson who moves to a Greek village to write her new book. After some time she strongly suspects that a man in the neighbourhood has committed a murder.

Director Mastorakis, who turned 80 years old earlier in 2021, worked with British composer Stanley Myers (1933-1993) for the first time on Blind Date and The Next One in 1984, and on several more projects, ending with Nightmare at Noon in 1988. On many films during this period in the 80s, Myers used the young German composer Hans Zimmer (born 1957) as assistant, co-composer and synth performer/programmer. Zimmer would of course later go on to be one of the most successful film composers in movie history.

The music from The Wind has been unreleased until this summer, when US label NoteForNote Music decided to release it on CD. 1000 copies were printed and the disc will surely sell out. The label has prior to this also released other early scores by Zimmer, like Rain Man and Thelma & Louise. Zimmer himself was not very pleased with the CD release of The Wind, calling it a rip-off in online forums. The composer probably would have wanted the score to stay in the archives forever, but as long as he doesn’t own the music himself, a record label can do what they please if they buy the rights from the film company.

The album features 23 tracks and runs for 49 minutes. Sadly, it does not include any liner notes, but the sound quality is good and the tracks are clearly separated between the two composers. In total, Zimmer wrote more music than Myers for the film. Zimmer’s tracks are electronic, while the Myers cues are a combination of orchestral and electronic. Zimmer appears to perform on some of the Myers tracks (like on the first track «Pinocchio My Son/Loving Airship/Sian’s Theme» and «Elias’ Murder») in addition to his own cues.

Myers wrote a charming 1:21-minute cue called «Greek Theme», which indeed sounds very Greek in its instrumentation. Unfortunately, the theme does not get played much more, not even in Myers’ «End Title» cue, which instead goes the atonal way. On some tracks we also hear elements of what would appear a few years later in the Myers/Zimmer-score for Paperhouse (1988).

Track 9, «Cassette Player Source», is a real eye-opener and the best track on the album,  as it features a theme that Zimmer would later revisit on his scores to Black Rain and Bird on a Wire. «Knife/Phone Call/Silent Threat/You’ll Die Anderson» is Zimmer doing Miami Vice with interesting samples incorporated. Zimmer’s «Broken Statuette/Bad Lovin»” is very peculiar, as the composer is channelling heavy rock music in the second part. Perhaps the filmmakers couldn’t clear the rights to a rock song so the composer had to write something similar himself. It has happened before.

Truth be told, quite a bit of this music isn’t particularly easy on the ear, like Myers’ «The Earth Moves/Talking To Bones/Phil Gets Vertigo», for instance. We also get 1 minute and 24 seconds of heartbeats from Zimmer’s synthesizer. Of interest is that director Mastorakis himself is credited as music editor, and that the music was recorded in the classic Lillie Yard Studios in London.

One for the Stanley Myers or Hans Zimmer completists, The Wind is nevertheless an interesting example of how the two composers collaborated during that busy period in the 1980s. Now, bring on Bird on a Wire!

The Wind is currently not available on streaming platforms, but can be purchased at the NoteforNote website. 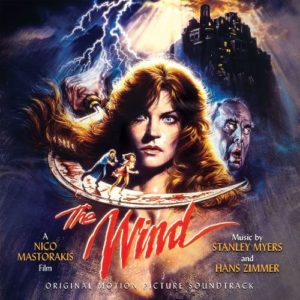