After the success of Tom of Finland (2017), the Finnish director Dome Karukoski gets his big international breakthrough with Tolkien (2019) – a biopic about Lord of the Rings creator J.R.R. Tolkien, starring Nicholas Hoult as the titular character. The film deals specifically about his early days as a kid and young man, studying at the University of Oxford and his subsequent service in the army during the first world war.

While the film is rather reluctant in its linkage between the man and his legendary work, treating the material somewhat safely, it is nonetheless spicier than other biopics in the same territory, with superb production design and vivid, imaginative dream sequences. Unlike, say, the stale A.A. Milne biopic Goodbye Christopher Robin (2018).

What a scoop it must have been for Karukoski to get superstar Thomas Newman to score his first Hollywood film. Newman, being no stranger to biopics about visionary men – like the Tom Hanks vehicle Saving Mr. Banks (2013) about Walt Disney – does what he does best, eschewing any extrovert references to Howard Shore’s scores for the Lord of the Rings films and applying his usual sound gimmicks to the material.

When Thomas Newman’s involvement first was announced, the Lord of the Rings fan community was ripe with speculation and theories about how this would look and sound. Some thought there would be references to Shore’s scores, at least in style, while others felt confident it would sound more like Saving Mr. Banks since the film dealt with the man more than his work. Well, neither was correct, really.

There is practically no reference to Shore’s music for the Middle-earth films. The only thing that comes close is a gorgeous, religious theme for choir that appears in tracks such as «Vinátta (Friendship) » or «Other Sorts of Scars». In the film, it appears when Tolkien draws pictures or has visions that will eventuelly end up in his tome, especially surrounding Mordor (like the desolate war trenches mirroring the landscapes of the Black Riders). But it’s not used consistently in such circumstances, so the link is tentative, at best.

There are at least two other main ideas in the score – a playful theme for the student brotherhood at the university, driven by whimsy pianos, flutes and classic Newman string chords, like «The TCBS», and a more personal theme for Tolkien with scattering voices, oddball meters and haunting flutes, as in «John Ronald». In fact, the score is very much a ‘what’s what’ of Newman-isms, with trademarks such as hammered dulcimer, string arpeggios, aching flutes, harps and soft synth textures.

Newman is particularly adept at creating magical, “static” and circular landscapes in his music, especially when applying elements from an oriental idiom wherein such musical structures are more common. As such, this score has more in common with his recent Indian-flavoured scores for The Second Best Exotic Marigold Hotel (2015) or He Named Me Malala (2015) than Lord of the Rings or Saving Mr. Banks – a definite compliment in this case.

In a way, the predictability is also the score’s strength. It’s like leaning back in a wellworn, comfy chair and letting the familiar, ethereal textures and sounds wash over you. A few new elements (like the voices) sustain interest, while the rest works on a more visceral level – as in “ah, classic Newman – I love it!”. 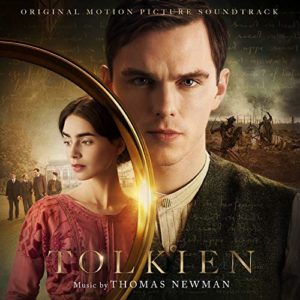