If someone in 1986 had said that a follow-up to Top Gun would arrive in 2022, I guess most people would not have believed it. But here we are, 36 years after the original film, and Top Gun: Maverick is hitting movie theatres with massive success. Director Tony Scott and producer Don Simpson have both passed away, but actor Tom Cruise and producer Jerry Bruckheimer are both still on board. Director is now Joseph Kosinski, who previously helmed Tron: Legacy (2010) and Oblivion (2013). In Top Gun: Maverick, Pete Mitchell (Cruise) tries to integrate into the digital age as a relic of a long-gone time. The test pilot is called back into action, where he’s ordered to help an inexperienced group of graduates towards new heights of advanced combat.

While interest and buzz about the film itself have been comprehensive in the last few years, there has also been an apparent curiousity about the music for the new film. Before the pandemic, Cruise stated that original composer Harold Faltermeyer would return for Top Gun: Maverick, a comment that most fans of the first film met with child-like glee and enjoyment. Faltermeyer had a short, but intense and successful run in Hollywood film music from 1984 until the early 90s, but since then he has only scored 2010’s Cop Out in US cinema, so he was clearly not a player on the scene anymore. But Cruise wanted him, and when news broke that Harold was going to collaborate with the man who in many ways took over his role in contemporary film music 30 years ago, countryman Hans Zimmer, hopes were set up high. A few years went by with several covid-related delays, before the final release date was set to May 27, 2022.

Shortly before the premiere, another bit of news broke when it was reported that pop star Lady Gaga had written a song for the film, and that she also had collaborated with Zimmer on the score (after Faltermeyer had done his part), giving her a composer credit on the film poster. A surprise indeed! It was also reported that ubiquitous film composer Lorne Balfe would receive a credit as score producer. So then, we can perhaps say that the general response from film music fans went downhill from great joy with the news of  Faltermeyer, via curious positivity with Zimmer and big-eyed surprise with Gaga, to perhaps a face-palm or two with Balfe. Sorry, Lorne.

Interscope Records has put out a soundtrack album running for 41 minutes and featuring 12 tracks of music. Unlike the first Top Gun soundtrack which only included one track of score (the «Top Gun Anthem»), this one features 8 tracks of instrumental material, so fans of film scores will receive a bit more to sink their teeth into.

Let’s look at the songs first. «Danger Zone» by Kenny Loggins has been on the radio since 1986, which shows what a bona fide classic it is. Giorgio Moroder’s songwriting and production are first class here, and the song warrants its place in the new film. «Great Balls Of Fire» was also in the first film. Now we get a “live” version performed by actor Miles Teller. Personally, I find the song annoying and I will surely program it out whenever I play the CD. «I Ain’t Worried» by OneRepublic isn’t much better. It is strangely similar to the 2006 hit «Young Folks» by Peter, Bjorn and John, and is being played while the actors indulge in a round of football on a sun-soaked beach, a scene where producer Bruckheimer clearly acknowledges the visual style of the late Tony Scott. And then we have Gaga’s «Hold My Hand». A perfectly middle-of-the-road pop ballad, it even includes a swift guitar solo towards the end, maybe to make it more appealing to fans of 80s music. I think it sounds a bit too much like the song that was the favourite tune for every 4-year-old girl since 2013, «Let It Go» from Frozen.

Over to the score. The album starts with the «Main Titles», which is a somewhat shorter version of the «Top Gun Anthem». Some strings can be detected in the background, but they blend nicely with the 80s feel. The anthem returns in track 9, «The Man, The Legend/Touchdown», where elements of the Gaga song also appear. This works surprisingly well. Track 12 is actually called «Top Gun Anthem», but it’s not a copy of the original, it features some new ingredients and only runs for a few minutes.

Tracks 5 and 10 («You’re Where You Belong/Give ’em Hell» and «Penny Returns – Interlude») are probably written by Zimmer. They feature a lovely and melodic, almost ambient theme and also the bell-like chime from the anthem. What happens in the middle of track 5 is that the typical Zimmer/Balfe-like repeating rhythmic string figure appear, an element that also permeates «Darkstar» and «Tally Two/What’s The Plan/F-14». This is rather lazy, considering how much time the various composers had to come up with something more exciting, original and listenable for the film. «Dagger One Is Hit/Time To Let Go» is also plagued by these nowhere-going strings…but then suddenly, what do I hear? A snippet of Faltermeyer’s tear-jerking theme for Goose from the first film, here in a less electronic version. Indeed, nice to hear.

The bottom line is that Harold Faltermeyer can’t possibly have contributed much to Top Gun: Maverick. Hans Zimmer’s entourage more or less took over, making the whole score not as exciting and “retro” as it could have been. Faltermeyer has also stated that he would have wanted more time one-on-one with Zimmer, but as Hans was busy with several other projects, that was not to be. It must also be mentioned that in 2014, Faltermeyer wrote a piece of music called the «Flying Bulls Anthem». That piece had all the elements of Top Gun, and would have worked wonders in this new film.

In addition to the regular soundtrack album, there is also a Japanese version that includes one extra track of score called «Canyon Dogfight». Lorne Balfe has stated that a full score album is in the works. Let’s see it that materializes. And let’s not forget that there still hasn’t been an official score album from the first Top Gun movie. La La Land Records has stated that they have been working on it for years, but they have met all kinds of obstacles on the way. Perhaps the success of Top Gun: Maverick finally will lift that project off the ground. 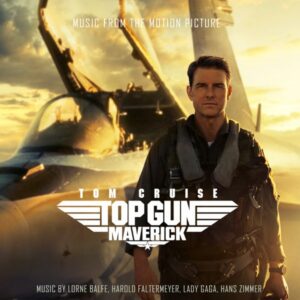 One of the year's best scores (so far) comes from a rather unknown Dutch "cli fi" film, with a beautiful vintage synth score by @gary_marlowe . Pocket review by Thor Joachim Haga here: http://celluloidtunes.no/everything-will-change-gary-marlowe/

Jon Aanensen reviews the score to TOP GUN: MAVERICK, in theatres now. How does it hold up to the original? http://celluloidtunes.no/top-gun-maverick-harold-faltermeyer-hans-zimmer-lady-gaga-lorne-balfe/